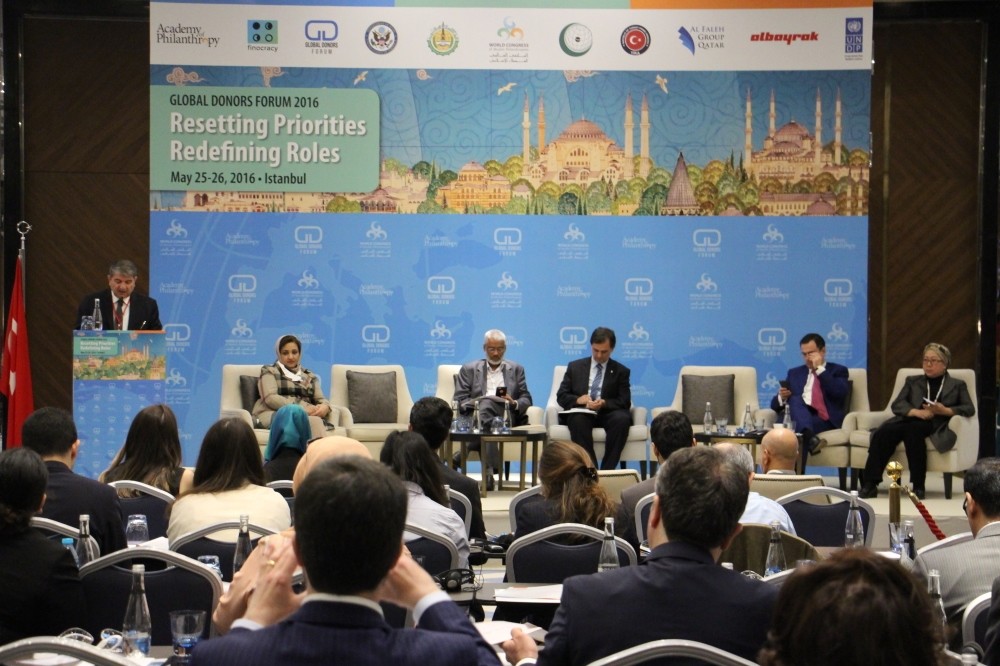 The two-day forum started Wednesday with sessions focusing on companies' contribution to Islamic philanthropy.
by daily sabah May 26, 2016 12:00 am

Charity members, bankers and dignitaries came together for the Global Donors Forum Wednesday, an event focusing on changing philanthropic priorities in the Muslim world

Global Donors Forum, a biennial event of the World Congress of Muslim Philanthropists, kicked off Wednesday in Istanbul. The two-day forum focuses on charity work in the Muslim world.

Representatives of charities, nongovernmental organizations, corporations and investors attended the forum chaired by Dr. Shaikha Aisha Faleh al-Thani, founder of a Qatari education company and a senior official of an education charity for Asian countries. The theme of this year's forum is "Resetting Priorities, Redefining Roles," and organizers of the event say they seek to build a new path for Muslim philanthropy at a time of a rise in extremism and conflicts affecting especially youth, unemployment, distressing health indicators and a downward spiral of education, as well as "political conflicts being dressed with religious ideologies." In a statement, organizers said the 2016 forum would attempt to set new priorities to redefine the role of philanthropy with a focus on the Muslim world in a radically changed global landscape.

The forum follows one day after the end of the World Humanitarian Summit, a United Nations event held in Istanbul that brought together heads of state and government from around the world to discuss international humanitarian aid efforts and challenges to the delivery of humanitarian aid.

On the first day, participants in the forum will discuss the potential for companies and institutions to offer Islamic financial services to strengthen Muslim philanthropic activities, and discuss how to address the challenges Muslims face in international philanthropic ventures. Participants will also discuss the changing priorities of Muslim philanthropy in terms of recipients of aid. A plenary session will see a discussion on extremism and Islamophobia by academics, journalists and NGO directors.

In today's sessions, participants will discuss "redefining the humanitarian system in the 21st century." Kerem Kınık, president of the Turkish Red Crescent, one of the sponsors of the event, will discuss the matter with his counterparts from the United States, Bangladesh and other countries. Daily Sabah columnist Meryem İlayda Atlas will be among the participants and will address a panel on the second day of the forum on the role of public relations to better the image of Muslim charities and philanthropists, despite the ongoing defamation of Muslims and Islam.

Addressing the forum, al-Thani said education was the most powerful weapon against poverty and philanthropic efforts should prioritize investment in education. She stated that the scarcity of energy resources, the growing global population, economic migration and income inequality will continue to be key problems in the new century, and the international community should share responsibility to address these problems. She called for "donors" attending the forum to provide sufficient resources to boost school attendance rates, but that no one actor, be they NGOs, the business world or governments, could achieve the goals of providing education to all alone, and all actors should join their forces to address the problem.

Shaarik Zafar, a Special Representative to Muslim Communities for the U.S. State Department, said humanitarian concerns were numerous and the refugee crisis was one of them, thanking Turkey for hosting more than 2.7 million Syrians displaced by the ongoing civil war. Zafar extolled Turkey for its generosity towards refugees. Referring to his talks with representatives of several Muslim charities, Zafar said they had common complaints of a lack of interest in sustainable solutions, the education of girls and microfinancing among donors, although donors were eager to donate large amounts of cash to the victims of natural disaster. Zafar said this needed to change, and it would require work with religious leaders to raise awareness of these issues. He highlighted the need to focus on solutions to create long-term employment and increase investment in girls' education.
RELATED TOPICS