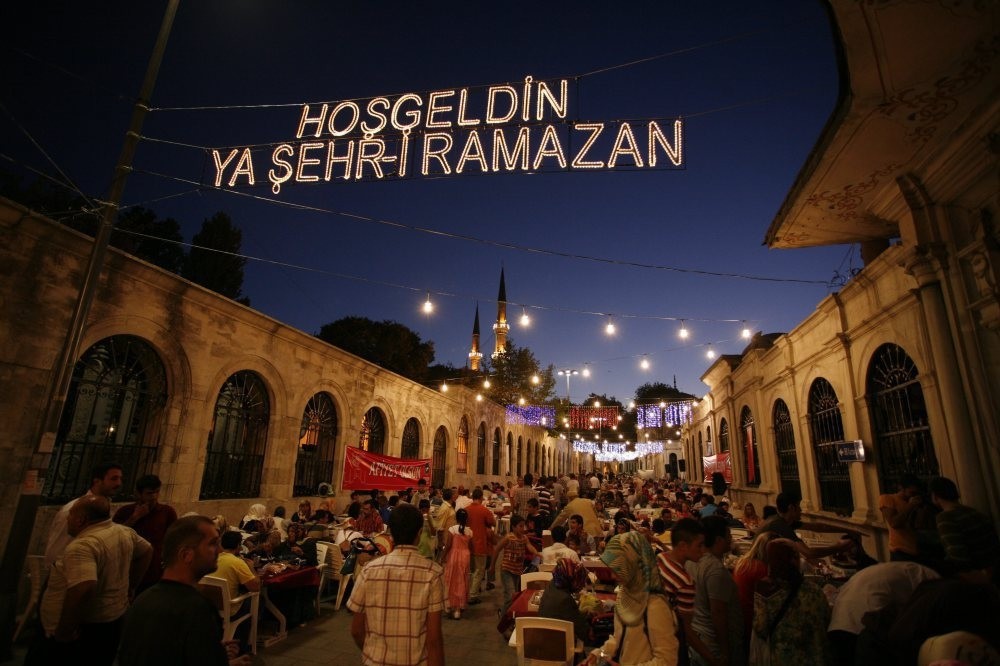 ,Welcome, O month of Ramadan,
by Anadolu Agency Jun 06, 2016 12:00 am
With the beginning of the holy month of Ramadan today, millions of Muslims are weighing up possible resolutions to improve their mental, physical and spiritual well-being. The month, which this year lasts from today to July 4, sees many of the world's 1.6 billion Muslims commit to a strict daytime fast, often taking the opportunity to make promises to improve their lives.

Among them are millions of Istanbulites weighing up resolutions as the month begins. Ramadan, the ninth month of the Islamic calendar, is a time when Muslims fast from dawn to dusk. The practice forms one of the five fundamentals, or pillars, of Islam.

The holy period creates a different atmosphere in Istanbul - changing millions of people's eating habits, working practices and praying times. Popular resolutions often include spiritual endeavors such as reading the Quran or praying daily in a mosque.

Others are more everyday - giving up listening to music, for example, or cutting out television or social media.

"I want to get rid of technology at least for a month," 22-year-old Savaş Taşkın, a university student, told Anadolu Agency.

"What I want most to do during Ramadan is to quit social media - Facebook, Twitter, Instagram - to focus on my prayers. I want to quit smoking and work out as well."

In Islam, the meaning of Ramadan is not just about fasting from food or drink - it encourages people to scrutinize their behavior and refrain from bad habits for the purpose of gaining "taqwa", the consciousness of Allah.

Ramadan is also a good time for Muslims to evaluate themselves spiritually and make resolutions in their lives.

But the challenge is to make these resolutions stick.

"We are always making promises every Ramadan but we cannot keep our word," Gökhan Kartışoğlu, 32, of Istanbul, said.

An accountant, Kartışoğlu said he has previously promised to quit smoking and start going to a gym but failed to keep it up.

Helping others is often part of people's resolutions.

Organizing fast-breaking meals during the Ramadan is a popular way of doing this for many Muslims.

"I want to serve people iftar in my home this Ramadan as I do each year," Halit Arı, a 52-year-old tradesman from Istanbul, said.

He also said he would regularly observe Ramadan night prayers, known as "teraweeh", during the month. "I am giving up scholarship for university students for the sake of this month and I planning continue to help them after Ramadan," he added.

Most Muslims focus on their prayers during the holy month for the sake of Allah, without expecting any personal reward.

One tourist in Istanbul said that every Ramadan she promises to perform dawn prayers but often fails. "I want to make it real this Ramadan and continue to do it in my whole life," Eritrean sightseer Hurriya, 22, said.

Hurriya, who now lives in Sweden, said she also wanted to read the Quran more. Ramadan is an opportunity for all Muslims to realize their resolutions. The challenge begins on today.
RELATED TOPICS