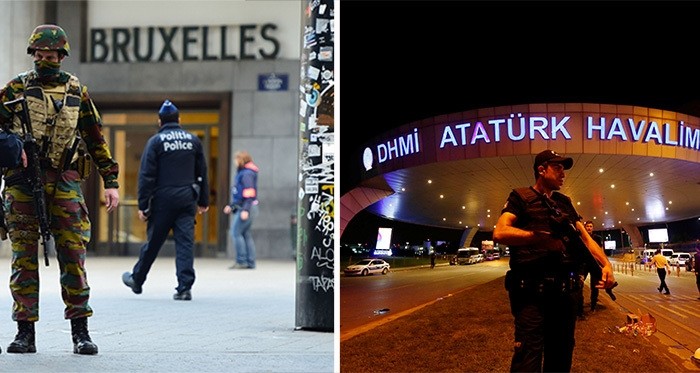 In the aftermath of the deadly Istanbul Atatürk Airport terror attacks, striking similarities were observed in the ways the attacks were carried out in Brussels and Istanbul, both two major European cities.

At least 41 people were killed, including 13 foreigners, and 237 injured on Tuesday in a triple suicide bombing and gun attack at Istanbul's main Atatürk Airport, in the latest deadly strike to stun Turkey's most-populated city.

Explosions on March 22 at the Brussels airport and a city subway center, that killed 34 people and wounded over 270 people, were carried out by three Daesh terrorists.

The attack in Istanbul airport on June 28 was also carried out by three terrorists, and initial findings signal the Daesh terror group is responsible.

"All initial indications suggest Daesh group was behind the attack, however, investigation still continues," Prime Minister Binali Yıldırım said on Tuesday, during a press conference at the airport.

In Brussels, the two of the three terrorists attacked the airport, while another one carried out the explosion at a metro station in the city.

Similarly, two of the terrorists attacked the Istanbul airport terminals, while the third one carried out an explosion at the airport's parking lot.

The attackers in Brussels airport opened fire on civilians, prior to the self-explosion, which was also done in Istanbul's attacks.

Meanwhile, in both Brussels and Istanbul, the attackers used a taxi as a means of transportation to come to the airport.