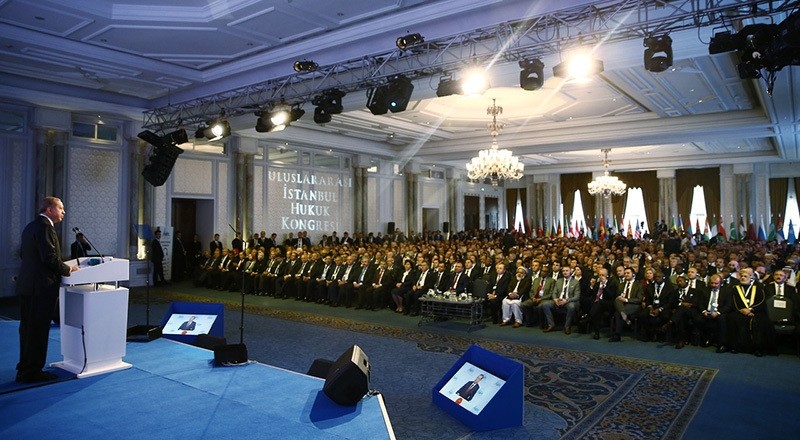 The International Istanbul Law Congress, a three-day event bringing together justice ministers, judges, prosecutors and other legal authorities and experts from around the world, kicked off yesterday in the city.

The Office of the Turkish Presidency and Justice Ministry are hosting the event that aims to cement judicial cooperation between countries and discuss issues regarding judiciary systems. Participants will also find an opportunity to compare their judicial systems and get to know how legal systems run in each other's country, organizers said. Some 175 jurists attended the congress, including 17 justice ministers, heads of supreme courts, chief prosecutors, judges of administrative courts as well as directors of schools educating judges and prosecutors. Alternative dispute resolution, which is rapidly becoming an integral part of legal systems in recent years, is among the subjects to be discussed at the event, along with expansion of international judiciary cooperation and acceleration of legal processes often hindered by unnecessary red tape.

In an opening speech at the event, President Recep Tayyip Erdoğan said Turkey has gone through a troubled period due to the influence of the Gülenist Terror Group (FETÖ) within the judiciary, describing the cases handled by Gülenist judges and prosecutors as "legal disasters." "Confidence in justice was eroded for some time. We need to give due punishment to those who hurt the public trust in justice," Erdoğan stated. FETÖ, which was behind the July 15 coup attempt, is accused of orchestrating sham trials thanks to its followers within the judiciary and law enforcement, to imprison its critics or anyone they deemed an obstacle to their interests and goals.

On the first day of the event, the heads of constitutional courts in Kazakhstan, Azerbaijan and Kosovo discussed the work of their courts while academics specialized on legal systems debated mediation, alternative dispute solutions, use of technology in judicial cooperation and judicial training.