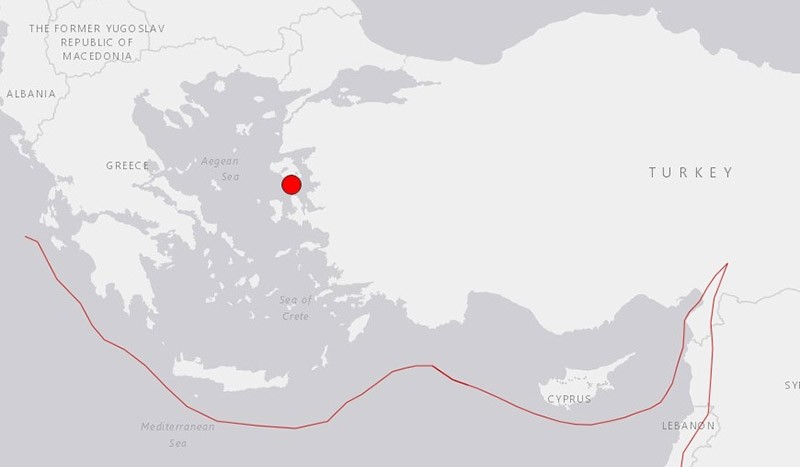 The earthquake rattled Turkey's western cities as well as Istanbul to the north and no casualties were reported during the temblor, which lasted for approximately one minute.

Authorities announced the epicenter of the earthquake was the Karaburun district of Izmir, the country's third largest city. Tremors were felt as far as Tekirdağ in the northwest and Istanbul, the country's most populated city located more than 500 kilometers north of Izmir, as well as on the Greek islands off the Izmir coast.

One woman has died in the earthquake, the Greek news agency ANA-MPA reported.

Firefighters pulled the woman from the rubble of her house in a village on the Greek island of Lesbos, where at least 12 people where also injured.

The European-Mediterranean Seismological Centre (EMSC) and the U.S. Geological Survey (USGS) put the magnitude of the earthquake at 6.3, with the latter saying that the earthquake took place at the Aegean Sea, 11 kilometers south of the Greek town of Plomari in Lesbos.

AFAD stated that there were at least sixteen aftershocks, with the largest ones measuring in at magnitude 4.0, 4.5 and 4.9. Experts stated that more aftershocks could follow. 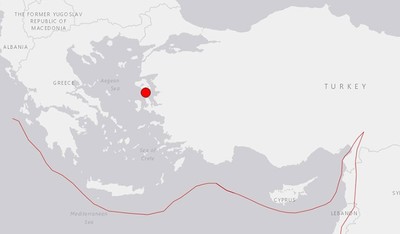 The earthquake, which occurred 22.9 kilometers off the coast of Karaburun - a small town of around 9,400 people - was felt most intensely in Turkey's western Izmir, Çanakkale and Balıkesir provinces. Residents, who panicked upon feeling the quake, ran to the streets.

Apart from Istanbul and Tekirdağ in the northwest, the earthquake was felt in Eskişehir, Kütahya, Manisa and Aydın provinces located near Izmir as well as in the town of Yalova, which is located between İzmir and Istanbul.

Speaking to Turkish media outlets, Izmir governor, Izmir metropolitan mayor, Karaburun district governor and Karaburun mayor all confirmed that no casualties took place as a result of the earthquake.

AFAD also said that it has carried an extensive scan and no damages were reported, however, 240 tents will be sent to the region as a precaution.

Meanwhile, across the Aegean, officials at the Greek Geodynamics Institute said that the earthquake shook the eastern Aegean close to Samos and Lesbos Islands.

Some structural damage was reported in Plomari on the Lesbos, which is the closest settlement to the epicenter of the earthquake.

Turkey is among one of the world's most seismically active countries as it is situated on a number of active fault lines, with the most potentially devastating one being the Northern Anatolia Fault (NAF), where the Anatolian and Eurasian plates meet.

The NAF, a strike-slip fault formed as the Anatolian plate was being pushed northwestwards by the Arabian plate, has produced devastating earthquakes throughout history, with the most recent ones being magnitude 7.4 and 7.2 earthquakes in northwestern Izmit and Düzce provinces in August and December 1999. The 1999 earthquakes killed thousands in Kocaeli, Adapazarı, Istanbul, Yalova and nearby towns in the northwest, which serve as Turkey's economic and industrial heartland.

In the latest earthquake-related disaster, than 600 people died in October 2011 in the eastern province of Van after a quake of 7.2 magnitude and powerful aftershocks.

Scientists have warned that the epicenter of Turkey's next big earthquake is likely to occur under the Sea of Marmara, where the NAF passes.