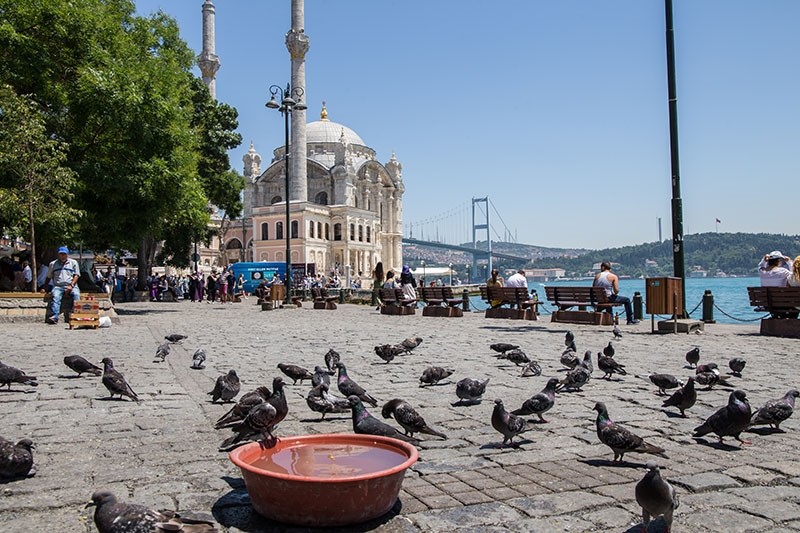 Pigeons gather near a bowl filled with water to cool off at Ortaku00f6y Square, with Istanbul landmarks Grand Mecidiye Mosque and July 15 Martyrs Bridge (Bosporus Bridge) in the background, on June 30, 2017. (Photo: Sabah / Ku00fcbra Usta)
by Daily Sabah with Wires Jul 02, 2017 12:00 am

As whole Turkey is under the effect of the heat wave coming from North Africa, a record heat of 37.2 degrees Celsius (98.96°F) was observed in Istanbul.

Meteorological engineer Adil Tek, the head of the meteorology laboratory of the Boğaziçi University's Kandilli Observatory, told Turkish daily Habertürk that temperatures on Friday were the highest in 106 years of temperature recordings, and a new record is also expected for Saturday.

Streets of Istanbul were almost deserted as thermometers reached up to 37°C on Saturday. High levels of humidity nearing 50 percent caused temperatures to be felt as high as 45°C.

"The atmospheric low pressure system in Europe's north causes a southward air flow to Italy, Greece and our country. We are also seeing the effects of the India-centered [seasonally] reversing monsoon from the Persian Gulf, this is what we call the "Persian thermal low." Therefore we are stuck between two low pressure systems. There is also another low pressure system in the south of North Africa. The areas located between hot air flows are described as ridge zones and cool winds do not blow in these areas," Tek explained.

Tek said that 2007's 44.8°C heat record in the southern province of Antalya, dubbed as Turkey's tourism capital, was observed again on Friday, although it was felt at 49°C due to humidity.

In capital Ankara, which is usually cooler than many of Turkey's largest cities due to its location and altitude, temperatures hit 37°C on Friday, and are expected to hit 41°C on Sunday.

Whereas in Izmir, known for its hot and humid summers, temperatures were above season averages at 41°C, but were felt as high as 47°C due to high humidity.

The Turkish State Meteorological Service stated that starting from Monday as a rainy weather system will enter Turkey from northwest and will be effective throughout the Marmara region as of Tuesday.