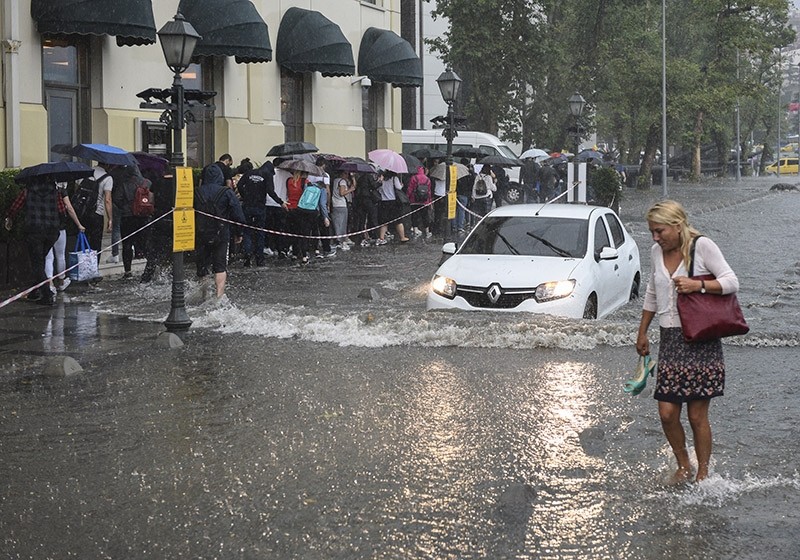 In what authorities described as a natural disaster, Istanbul was inundated with flash floods Tuesday that left people stranded on top of their vehicles and stopped some mass transit services

What started as a midnight shower turned into a heavy rainfall by Tuesday morning in Istanbul, triggering flash floods across the country's most populated city. Rainfall disrupted daily life, leaving motorists stranded in their cars and interrupting metro and bus services during morning rush hour when millions of Istanbulites were struggling to get to work. Authorities described the chaotic scenes as a result of one of the worst natural disasters linked to rainfall in the city in recent memory.

The Directorate General of Meteorology warned Monday of heavy rains and possible flooding, saying that summer temperatures were expected to drop from over 30 degrees Celsius to 20. A few showers hit Istanbul late Monday, before it started to pour rain early Tuesday. The rain reached its height at 8:30 a.m., with huge black clouds covering the sky.

Meteorologists said an amount of "rainfall normally seen in a one-month period" hit the city in just a couple of hours. Doğan News Agency reported it was the most severe rainfall in the past 32 years, with 128 kilograms (282 pounds) of rainwater hitting some districts on the European side of the city. Average rainfall for July so far was 32.5 kilograms per square meter. The flash floods also hit northwestern provinces of Çanakkale, Tekirdağ and Balıkesir provinces.

Transport Minister Ahmet Arslan described the heavy rainfall as a "disaster." He said it took just 90 minutes of heavy rain to create the "extraordinary situation."

Despite the disruption, no casualties have been reported, according to Disaster and Emergency Management Authority (AFAD) President Mehmet Halis Bilden: " [AFAD teams] have all been carrying out search and rescue efforts. Thank God, there are no casualties according to initial reports."

Istanbul Metropolitan Municipality said in a statement that 65 kilograms of rain fell per square meter in central locations in an hour, accompanied by winds blowing up to 80 kilometers per hour.

Istanbul Governor Vasip Şahin said in a joint press conference with Istanbul Mayor Kadir Topbaş that severe rainfall expected again in Istanbul after 2:00 p.m. local time. Turkish State Meteorological Service announced that the rain will lose its pace by 3:00 p.m. local time, but issued a warning for northwestern Kocaeli, Yalova, Bursa, Sakarya, Düzce, Zonguldak and Bartın provinces, where the rainy system is expected to be effective until Wednesday.

Numerous buildings, offices and shops were flooded and several people were trapped in their cars and homes due to the deluge. Images on social media showed some drivers and pedestrians in the Aksaray and Üsküdar districts swimming their way to the other side of the road on some streets with their heads barely seen above the floodwaters. A widely-circulated image on social media showed a raft reaching people stranded on an underpass.

Many buildings and offices were flooded as swirling waters tore down trees and utility poles. A number of minor traffic accidents have been recorded so far

Flooding in some metrobus and metro stations led to disruptions, while the Eurasia Tunnel, which connects the Asian and European sides of Istanbul under the Bosporus Strait, was temporarily closed to traffic in the Europe direction.

Istanbul Sea Buses (IDO) canceled several ferry services in the Marmara Sea, and although there were no disruptions in ferry services across the Bosporus, Istanbulites had a hard time reaching ferry terminals due to flooding in seafront areas.

Meanwhile, the Istanbul Governorate urged people not to use personal vehicles unless necessary.

The Disaster Coordination Center (AKOM) also published a warning for Istanbulites, saying that folding ceilings could fly away or that trees could fall over due to the severe winds and storms.

Istanbul last saw such destructive rainstorms in 2009. The rainfall was less severe than Tuesday, but led to 31 deaths across the city, mostly motorists and passengers trapped in vehicles, particularly on the overflowing banks of small streams running through the city.