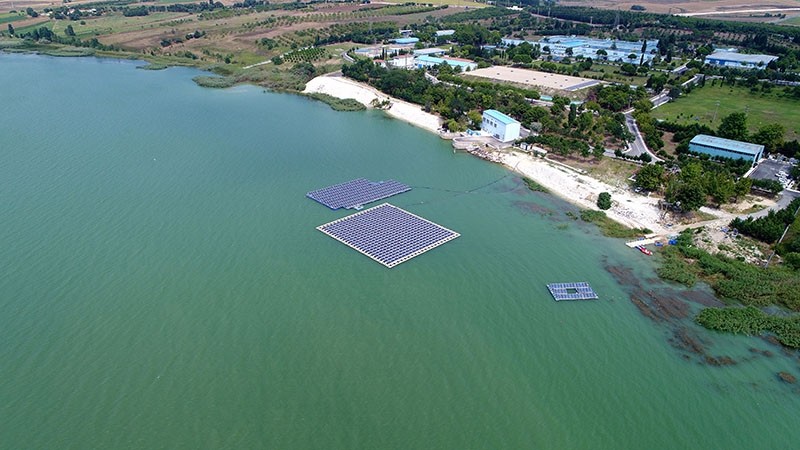 The Floating Solar Power Plant, the first of its kind in Turkey, officially went into operation in Istanbul's Lake Büyükçekmece on Friday.

The project was undertaken by Istanbul Enerji, a subsidiary of the Istanbul Metropolitan Municipality, and Istanbul Water and Sewerage Administration (İSKİ), which administers the fluvial freshwater lake that provides water to Istanbul.

The plant, constructed from non-corroding material, is comprised of 960 polycrystalline photovoltaic panels that provide 260 watts of energy each.

Currently, the plant has an installed capacity of 250 kilowatts, which is planned to be increased in the future.

The plant is expected to prevent 210 tons of carbon dioxide emission every year.

Using the experience gathered in this project, the municipality wants to expand floating solar energy plants to other bodies of fresh water including dams, to cover Istanbul's increasing energy demand and curb water loss due to evaporation.

"Since the systems isolate the water surface from the air by 70 percent, it will be an important factor in preventing water loss and evaporation, which are one of the most important problems encountered in meeting such an intense water demand," a statement by Istanbul Enerji said.

"The R&D works, which started after the establishment of the facility, will continue for 12 months and the effects of floating systems on energy production, water quality and ecosystems (aquatic creatures, algae formation, etc.) will be monitored," it added.