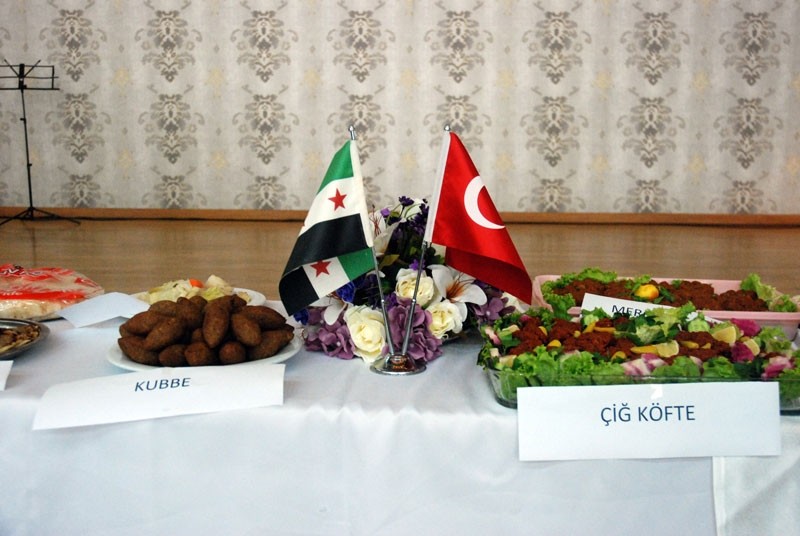 Turkish and Syrian women shared traditional meals at an event Wednesday to promote solidarity in the Esenler district of Istanbul.

Gathering at the local culture and art center, 20 Turks and 20 Syrians shared their countries' culinary specialties, from Syrian lentils and semolina pudding to Turkish stuffed grape leaves and baklava.

The event was organized by the project "Supporting Local Governments to Support the Syrian Refugees' Peaceful Living with the Local Peoples" with the support of the Esenler Municipality, World Academy for Local Government and Democracy (WALD), and the United Nations High Commissioner for Refugees (UNHCR). The project aims to promote social and cultural harmony between Syrian migrants and Turks.

Women began the dinner by explaining the dishes and their ingredients, after which all were invited to taste and enjoy.

Women at the event shared about the importance of unity and solidarity, symbolized by sharing cultural foods with each other.

Syrian Dorsun Alalwo, who has lived in Turkey for three and a half years, thanked Turks for their hospitality and pointed out how Syrian and Turkish foods are both distinct and similar.

Yüsra Yalgı, a Turk, remarked, "At such times we at least see that our cultures are not different from each other."

"We prepared a beautiful fraternal meal for the Syrian and Turkish women to get to know each other's cultures. The meal gave us the opportunity not only to share food, but also to talk and try to understand each other," Acar said.

"We organized the event so that our Syrian brothers and sisters do not feel alone here."

Turkey, for the third consecutive year, has hosted the largest number of Syrians worldwide, which accounts for around 45 percent of all Syrian refugees in the region, according to the UNHCR's June statistics. At the end of September, the number of Syrians in Turkey exceeded 3.2 million, with over 510,000 in Istanbul.