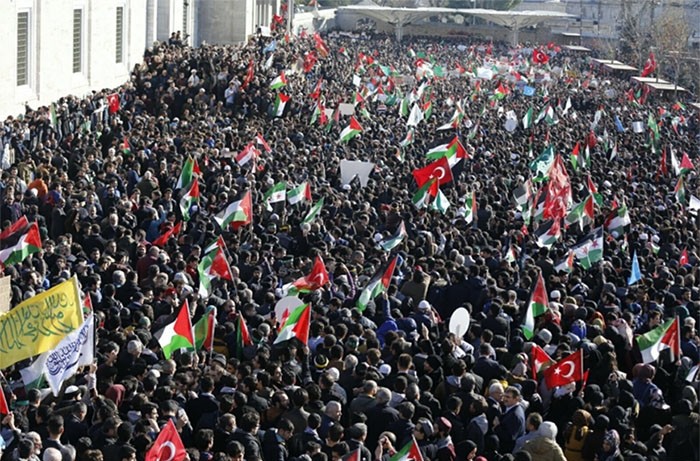 Thousands of Turkish people marched after the Friday prayers at Istanbul's landmark Fatih mosque to protest against the decision of U.S. President Donald Trump to recognize Jerusalem as the capital of Israel.

Demonstrators raised Turkish and Palestinian flags, chanting "Jerusalem is ours and will remain so!" and "down with America, down with Israel."

Other major protests were also held across Turkey as rallies in capital Ankara and southeastern Diyarbakır province brought thousands of protesters together after the Friday prayers.

Turkey's Religious Affairs Directorate also voiced concern in its Friday sermon over the decision, and described Jerusalem as "the apple of our eyes" in the sermon.

"It is a sacred and blessed city with its name and environs."

"Many prophets such as Ibrahim, Yaqub, Musa, Sulayman and Isa lived in Al-Quds and its surrounding region, which has been the cradle to many civilizations for thousands of years," it said, adding that the last sacred guest of Jerusalem was Prophet Muhammad with the event of Isra and Miraj.

President Recep Tayyip Erdoğan harshly criticized Trump over his decision, calling Jerusalem, the third holiest site in Islam, "a red line" for Muslim and invited the Organisation of Islamic Cooperation (OIC) to an emergency summit meeting of on December 13 in Istanbul.

Jerusalem is home to key Muslim, Jewish and Christian shrines and its eastern sector is sought by Palestinians as a future capital. Israel claims the entire city as its capital.