Activists hang banner on Istanbul bridge in support of Jerusalem 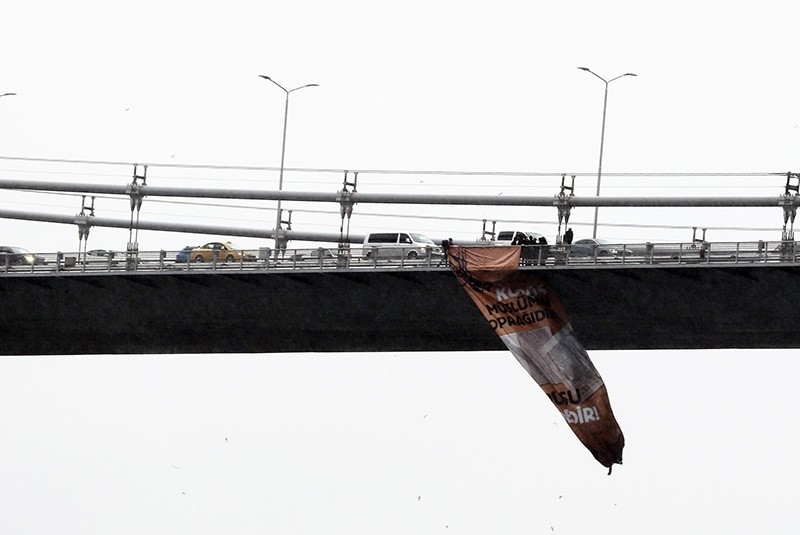 A youth wing of a foundation on Sunday hung a giant banner from one of the Bosporus bridges in Istanbul in support of Palestinian claims to Jerusalem.

The Yedi Hilal Foundation hung the banner reading "Jerusalem is a Muslim land and its title deed belongs to us" from the July 15 Martyrs' Bridge, formerly known as the Bosporus Bridge.

Police ordered the banner to be taken down and it was removed after 10 minutes.

The protest was the latest reaction to the U.S. announcement last week that recognized Jerusalem as Israel's capital and promised to base the U.S. Embassy in the divided city.

In a statement, the foundation said the protest aimed to tackle the persecution of Muslims and "apathy" over the U.S. decision.

"Jerusalem is an independent voice, a total struggle, ascension of humanity on the earth and a remedy for our body and the living hearth of resistance and resurrection," it said.

"In light of these feelings, today, we declare that what is done to Jerusalem is unacceptable. We want to be the voice of Jerusalem heard from Istanbul."

Calling on the international community, the group said: "The banner we hung in Istanbul is our memory and our ideal. We call on the seven continents from the seven hills [Istanbul] to show that Muslims are standing by Jerusalem."