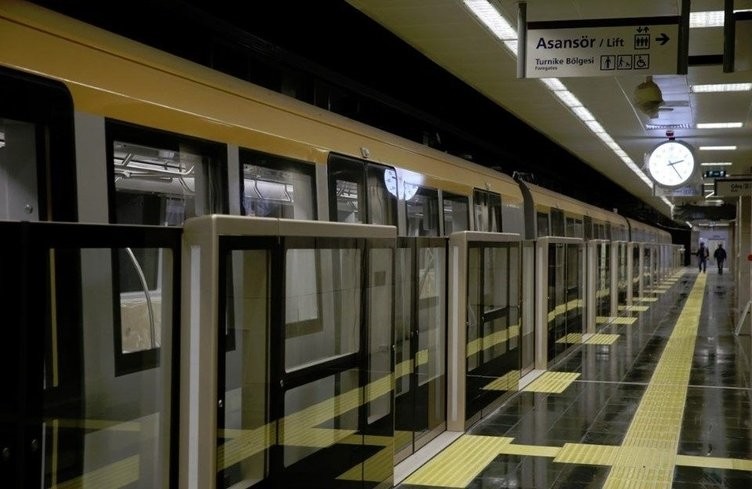 Istanbul residents are now able to enjoy an automated metro system which became operational on Friday and has increased the length of the city’s metro network to 167 kilometers. By 2023, the city will have a subway system of more than 1,000 kilometers long

A groundbreaking innovative transportation system was offered for the convenience of Istanbul residents. The first phase of the Turkey's first fully automated subway system became operational on Friday in the Asian side of Istanbul with an opening ceremony attended by President Recep Tayyip Erdoğan, Prime Minister Binali Yıldırım and Istanbul Metropolitan Mayor Mevlüt Uysal.

Speaking at the opening ceremony of the driverless metro, President Erdoğan highlighted the aim to building a transportation network that operates independently of vehicle traffic in Istanbul. With the operation of Üsküdar-Ümraniye driverless metro, the total length of subway lines in Istanbul has reached 167 kilometers. By 2018, Istanbul will have a 355-kilometers-long metro network, Erdoğan informed.

After his speech in Üsküdar, Erdoğan, accompanied by PM Yıldırım, Transport Minister Ahmet Arslan, Istanbul Mayor Uysal and other high ranking officials, went for an inaugural spin, making the first journey to Ümraniye.

As part of Turkey's 2023 vision which entails the accomplishment of mega projects, the government's aim is to put a 1,023 kilometers-long subway network in Istanbul, hence Istanbul will have a transportation system that is not attached to the city's heavy traffic.

The first phase of Üskudar-Sancaktepe Metro line in the Asian part of the city, the 10.5-kilometer part of the 20 kilometer-long metro line from Üsküdar to Ümraniye is now operational while the remaining part will be launched in June 2018. The estimated cost of the project was reported at 800 million euros.

The full-length line consists of 16 stations and will carry 700,000 passengers per day when it is completely functional.

The metro line will have 126 cars in total. The maximum passenger capacity per hour will be 64,800 while the maximum speed of the cars will be 80km/h. The driverless metro will be operated from a remote command center.

The line will be integrated with two major intercontinental mass transportation lines - Bus Rapid Transit (Metrobus) and Marmaray intercontinental undersea subway- which connect Asian and European parts of the city.

The metro will stop at each station for 20 seconds and will run every 90 seconds. When the second phase of the metro line becomes operational, the duration of the whole trip will last 27 minutes. President Erdoğan also announced that the plan is to extend this automated metro line until Sabiha Gökçen Airport.

Indeed, Istanbul has a driverless metro line, the funicular, which connects Taksim and Kabataş. The funicalar became operational in 2006 and the distance between these two destinations only takes 3 minutes, and the funicular carries almost 3.000 passengers per day.