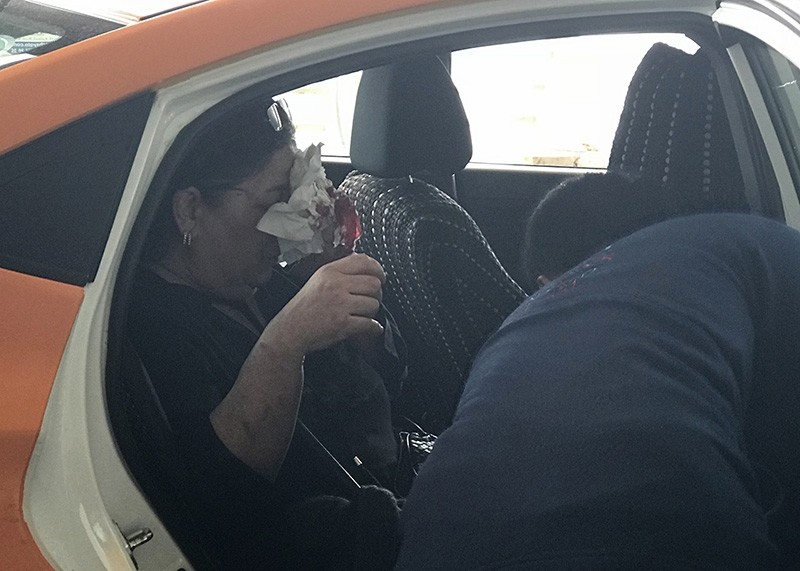 While Turkey has been discussing the poor service and security issues of regular taxis amid a violent confrontation with Uber drivers, the international mobile transportation application has suffered a setback to its public image upon reports that one of its drivers beat a female passenger near Istanbul's main airport.

A middle-aged woman, identified as Birgül E., was injured after her Uber driver allegedly hit her nose prior to arriving Sunday in Istanbul's Atatürk International Airport with her daughter for a flight to the U.S.

An ambulance arrived at the entrance of the international terminal for first aid, and the woman was taken to the clinic inside the terminal to stop the bleeding. Her daughter, who declined to comment, was escorted to the plane by police officers to catch her flight on time.

Murat Tuğa, the taxi driver who brought Birgül E. and her daughter to the airport, told reporters that he saw a van stop on the roadside while he was on his way to the airport, and pulled over thinking there might be a problem. 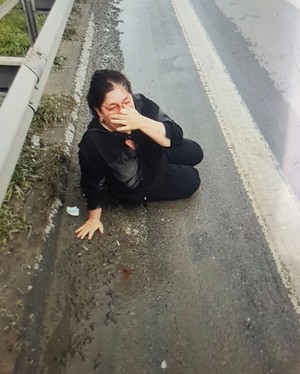 "A girl then came asking for help. It was a VIP type Uber vehicle; I even have its pictures. While I was listening to the girl, its driver threw [Birgül E.] to the barrier," Tuğa said, adding that the driver escaped while he was trying to stop the van.

The woman told Tuğa that the argument with the Uber driver began when he wanted to charge 250 Turkish liras for the trip from the Istinye neighborhood in Sarıyer district to the airport, nearly three times higher than a regular taxi fare and two and half times higher than Uber's own fare calculator. When the woman objected, the driver pulled over and claimed that he was not allowed into the airport and wanted to drop them off on the highway, Tuğa added.

Following her treatment, Birgül E. was brought to the police center of the airport. When reporters asked whether she was beaten by an Uber driver, she nodded.

In footage later provided by Ihlas News Agency, reportedly captured by a camera inside the van, the woman is heard yelling angrily at the driver about the fare at the beginning of the journey near Istinye. The woman, using curses, threatens the driver and tells him that she will launch a complaint. The driver is heard trying to respond calmly at first, saying that she could get off, but suddenly loses his temper and pulls over near the business district of Maslak, nearly one-tenth of the entire journey. The footage ends at that scene, and it is not clear how the journey went on for some 30 kilometers (17 miles) more to Basın Ekspres Highway, where Birgül E. and her daughter were kicked out of the vehicle.

The driver, identified as 24-year-old M.Ü., was detained later in the day and was released under judicial control.

Uber released a statement on the incident, saying that the driver's behavior is unacceptable and the company is working closely with the local police to support the ongoing investigation. The driver is suspended until the investigation is concluded, it added.

However, the incident was approached with suspicion by some social media users, with some claiming that it was a setup by taxi drivers amid the ongoing feud with Uber.

In recent months, violent attacks by taxi drivers targeting Uber vehicles have made headlines in Turkey, amid an ongoing debate throughout the world regarding the legality of the application. Turkish taxi drivers allege that Uber is not legal, unfairly takes their market share and does not pay any taxes in return.

On the other hand, Uber claims that it is merely a service provider between customers and its affiliated drivers who meet the demands of the market.

The first hearing of a lawsuit launched by taxi driver associations aiming to ban Uber in Turkey took place on March 12, with hundreds of taxi drivers gathering in front of Istanbul's Çağlayan Courthouse in protest.

Taxi driver associations express that such behavior applies to a small portion of taxi drivers or drivers of so-called "pirate taxis." They also call for reform in the sector, tighter regulations for the selection of drivers and gradual transition of taxi plates to experienced drivers instead of plate holders employing others as drivers.