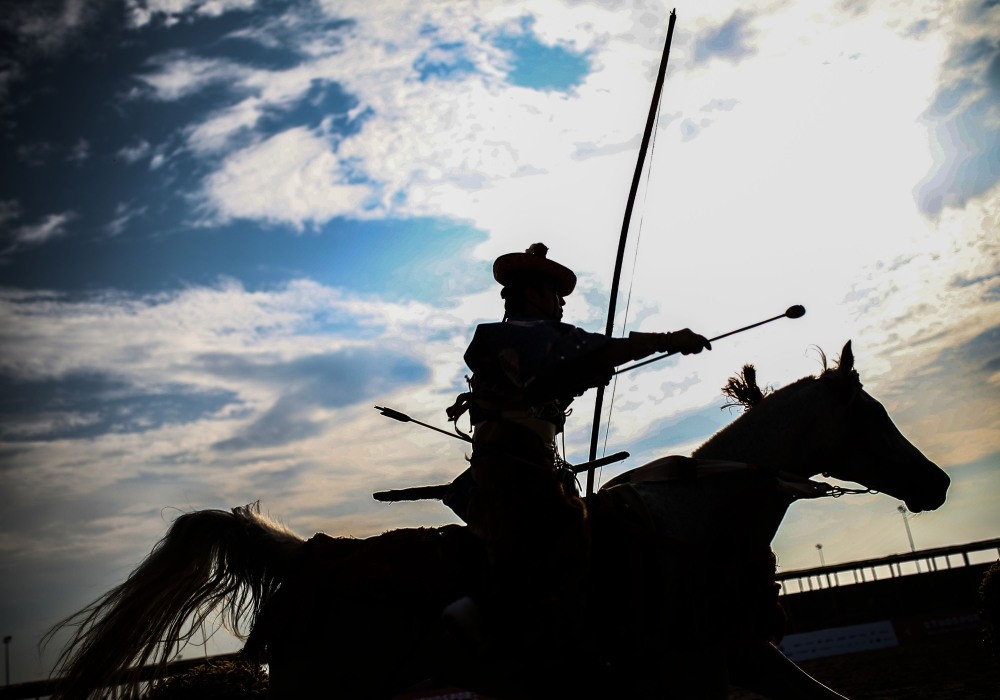 A Japanese archer performs yabusame, a type of mounted archery, at the Ethnosports venue.
by Daily Sabah May 11, 2018 12:00 am

The Ethnosports Cultural Festival, an event that puts traditional sports in the spotlight, continued on its second day of Thursday with feats of mounted archers from Japan and Turkish wrestlers showcasing their skills.

The five-day festival in Istanbul is in its third year now and its organizers are ambitious to make it the Olympics for ancient sports and a display of different cultures where people from around the world promote their traditions.

Yesterday's program opened with kökbörü, or gökbörü, a traditional equestrian sport of Central Asia in which riders on horseback try to catch a runaway goat by sliding on their saddles. A Kyrgyz team awed the audience with their stunt show.

This was followed by a falconry contest that made its festival debut this year with Qatari falconry experts on hand to unleash the birds on their prey in the festival grounds.

Another ethnosport introduced this year was Yabusame mounted archery from Japan. In it, archers on the horseback shoot their arrows with arrowheads resembling turnips successively at wooden targets. Employed as a military exercise for Japan's samurai warriors since the 12th century, it is nowadays a cultural ritual for Japanese archers. After letting out a loud scream on par with tradition, the archer gallops down a track of about 255 meters at high speed.

Arimoto Daisuke, from a 20-strong team of Yabusame archers attending the festival, said they were proud to be a part of the event. Noting the similarities with Turks' own mounted archery, Daisuke told Anadolu Agency (AA) that they differ in motives.

"Yabusame is more a way of worship than sports," he said, referring to its roots in the Shinto faith.

The practice is a ritual to receive God's blessing for prosperity of the land and people. He says few people nowadays perform it as it is a difficult branch of archery but still a favorite for the Japanese public.

In another section of the festival, falcons from Qatar drew a curious crowd as birds gave solemn stares from the hands of their owners who were wearing protective gear. The crowd was in awe as the birds flew to reach their prey some 800 meters away.

Speaking to AA, Ali bin Khatem al-Mehshadi, chairman of the Qatari Society of Al-Gannas which brings together falcon breeders, said falcons are not just used for aerial feats, but are an important part of Qatar's history.

"Falcons are an important part of our culture. Some 70 percent of the people in Qatar are doing this sport and are interested. The sport of falconry is a historical sport for the people of Qatar. The falcon is the symbol of Qatar. So we constantly organize festivals and contests and give out big prizes," he said.

Elsewhere, Turkish oil wrestlers tried to get a hold of each other in this ancient sport that plays out on a grass pitch. The wrestling-heavy program for Thursday also included mas wrestling and friendly games between the Mongolian and Sakha Republic. Devised in Sakha Republic by ethnic Yakuts, mas wrestling differs from traditional wrestling sports with two athletes wrestlers fighting over control of a wooden stick while firmly putting their feet against a wooden board.