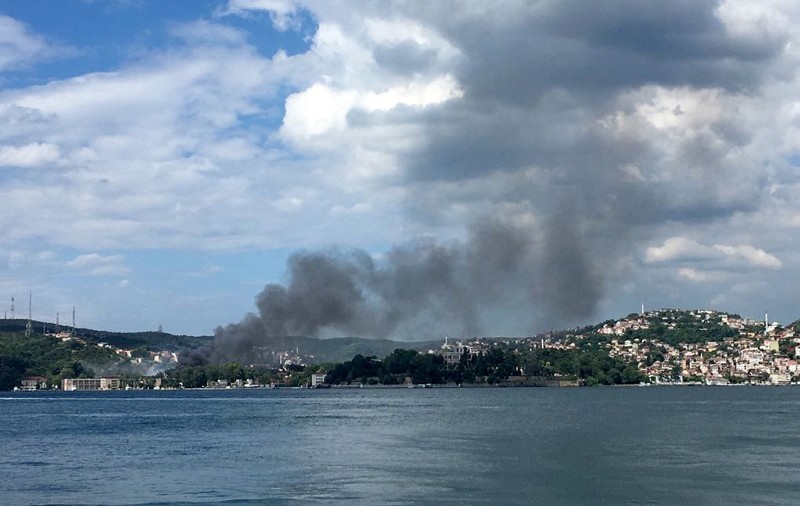 A massive fire broke out in a historic shoe factory in the Beykoz district of Istanbul Friday afternoon, but it is now largely under control, officials said.

The fire at the Kundura, an old factory now used as a filming set for famous Turkish series such as the historical-period drama 'Resurrection: Ertuğrul' ("Diriliş Ertuğrul" in Turkish), involved a large quantity of plastic and spread to nearby areas.

Plumes of black and gray smoke were seen billowing from the factory in videos and pictures posted on social media.

Beykoz mayor Yücel Çelikbilek said he was saddened by the blaze but said that there were no casualties in the fire, which started when "wooden material" caught fire.

"The necessary interventions were made and right now it's under control," he said, adding that the precise cause would become apparent when fire workers had finished their work.

Firefighters currently tackling a blaze that broke out at a historic shoe factory — used by many Turkish TV series, including "Diriliş Ertuğrul," as a filming location — in Istanbul's Beykoz district https://t.co/Z1yQNePJg1 pic.twitter.com/USOw76PqFN

Reports said that there were no film shootings in progress at the time.

Istanbul fire service chief Ali Karahan confirmed that no one had been hurt.

Yıldırım Group, the company that runs the site, said the tents used in the 'Resurrection: Ertuğrul' series had caught fire.

The extent of any damage to the set, on the banks of the Bosphorus, was not immediately clear.

Formerly a shoe factory, Kundura was turned from 2005 into Turkey's most important movie set, offering an entire fake city of possible shooting venues including streets, administrative buildings, and a forest.

Turkish soap series, most of which are shot in Istanbul, have become a major success abroad as well as at home, enthralling viewers in the Balkans, Arab world and also Latin America.

Along with Diriliş, which centers around the life of Ertuğrul, the father the founder of the Ottoman Empire Osman I, a host of other series have been shot at Kundura, including Kurtlar Vadisi (Wolves Valley) a long running franchise about a Turkish secret agent.