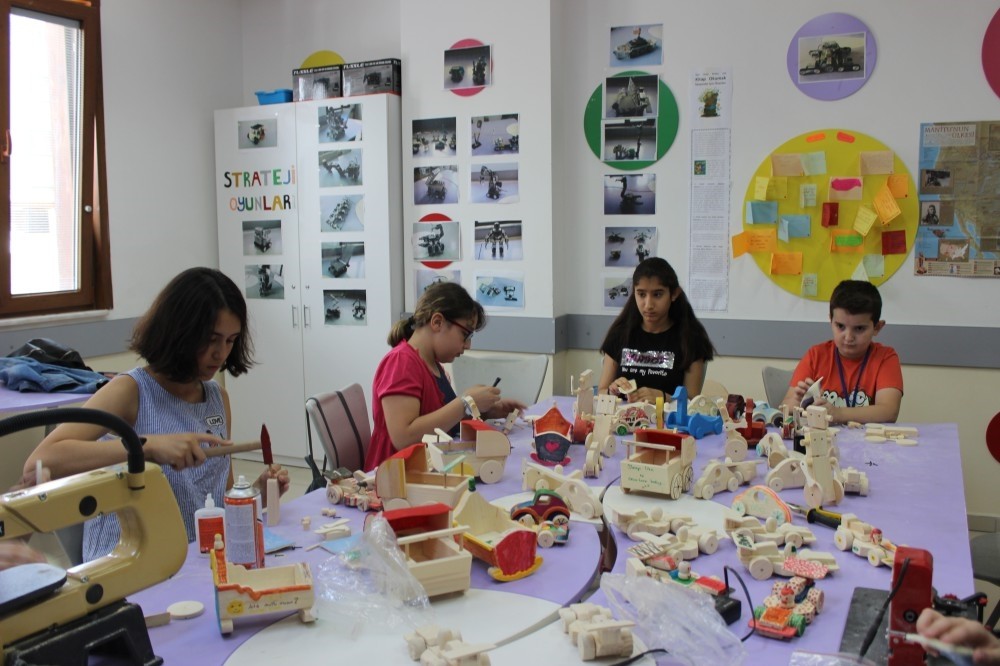 From cradles to cars, children build and paint wooden toys at the workshop.
by Daily Sabah with IHA Jul 03, 2018 12:00 am

Turkey is home to the world's largest Syrian refugee community and a large proportion of them are children. Forced to flee their homeland with little possessions, most don't have any toys and many poor families cannot afford to buy new ones for them. This is what inspired a district municipality in Istanbul when they launched summer activities for school children. Children from Bağcılar district both learn handcrafts and build toys for Syrian refugee children.

Taught how to carve wooden toys, they have built some 300 toys in less than one month for their Syrian peers. Toys, from cars and cradles to robots, will be sent both to Syrian children and children of needy Turkish families.

Around 240 children between the ages of eight and 13 years old work tirelessly at a workshop at Bağcılar's Enderun Talented Children's Center that offers summer classes for children. Some get behind the lathe under the supervision of teachers while others dabble in the mastery of painting toys. They plan to build at least 200 more toys during their time at the center and deliver them to Syrian children by themselves.

Murat Demir, one of the teachers at the center, says children build toys for children from the ages of four to 10 years old. "We think that children here will be charitable citizens of tomorrow by doing this," he told İhlas News Agency.

Bahadır Memiş, one of the children at the center, says every child "likes playing with toys." "I just started this class but I really feel good to be here. I really liked woodcraft. I believe other children will be very happy once they have what we built here," he said. Betül Demirci, another pupil, said she and her friends preferred to attend the classes while other children "play outside." "We work here but it is fine. It is good to spend your holiday to make something for other children," she said.