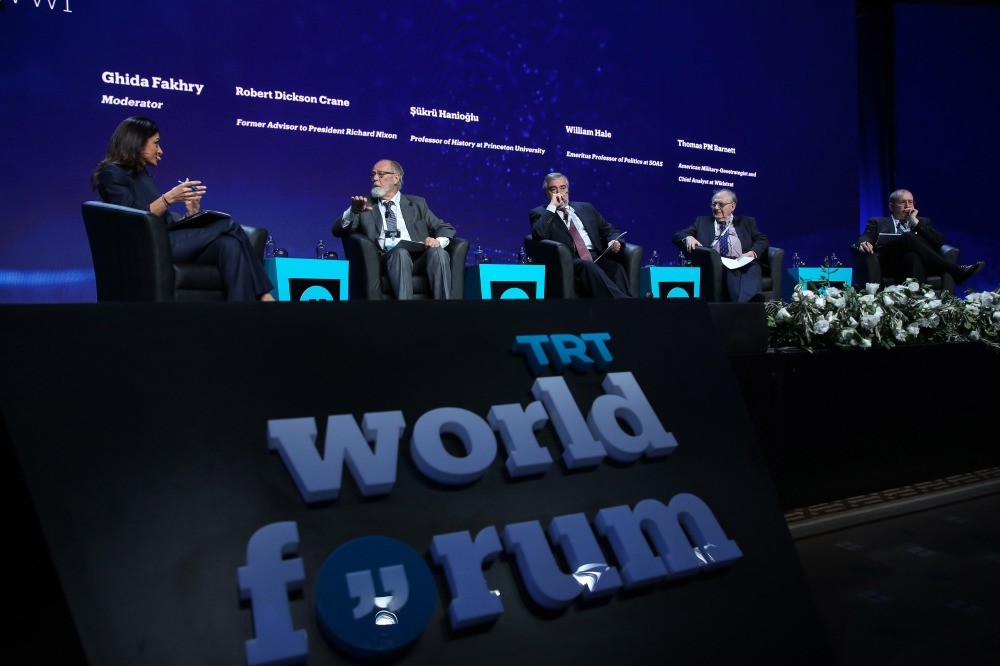 The 2nd TRT World Forum, an international event organized by Turkey's eponymous broadcaster's English-language channel, kicked off in Istanbul yesterday with discussions on the change in the world order over the past century and challenges to the unity of Europe

An international forum that brings together hundreds of participants from opinion leaders to policymakers, academics and businesspeople kicked off in Istanbul yesterday. The two-day forum organized by the TRT broadcaster's English-language channel offers a new perspective of discussion on the international matters.

Themed "Envisioning Peace and Security in a Fragmented World," the event's first day focused on world order or changes and challenges to it since World War I, and hosted a discussion titled, "The EU and its Discontents: Is it the End of the European Project?"

Making an opening speech, Parliamentary Speaker Binali Yıldırım said "justice and goodwill" was needed to establish the peace referred in forum's title. "Realizing a world where everybody lives in peace, tranquility, and trust is possible so long as powerful countries forge cooperation based on justice and goodwill," he said, noting that fight against terrorism was the primary area in which cooperation is needed. Yıldırım went on to criticize the United States for cooperating with terrorists instead, explaining how an affiliate of the PKK terrorist group that operates in Syria received open and direct support from Washington. Yıldırım also criticized the European Union in his speech, stating that the EU is not active enough in working to tackle international problems. "The EU's approach to the world's current problems is far from finding solutions," he said.

The event aims to touch upon alternative solutions to current problems the world is facing, its organizers say, with a theme inspired by Turkey's new mantra in foreign policy, "The world is bigger than five." This is a challenge to the five members of the United Nations Security Council which have the ultimate say on global issues.

Referring to a recent speech by President Recep Tayyip Erdoğan at the United Nations General Assembly, Yıldırım said the power to veto in the United Nations Security Council was introduced to prevent war but was now serving the purpose of creating wars. He added that no one state should have the right to veto.

In the first panel of the forum titled, "A World In or Out of Order? A Hundred Years since WWI," participants discussed the current order and its problems. "If you look at the history of civilization, they rise when they meet the challenges and fall when they no longer meet them. We are deteriorating. We are losing hope. U.S. influence is declining in the world and Turkey needs to provide the missing leadership," Robert Dickson Crane, prominent author, jurist and an adviser to former U.S. President Richard Nixon, said. William Hale, an emeritus professor of politics from SOAS University of London, said there were three theaters of conflict in the Middle East. He said this was the conflict between Israel and Palestinians "in which the United States plays an important role," in Syria where Russia has been the dominant power whilst the U.S. power has been declining and the third was between Iran and Saudi Arabia, which both Russia and the United States are secondary powers.

Speaking at the same panel, American analyst Thomas P.M. Barnett said that the United States sought to replicate its model of interstate integration around the world after World War II and it became "globalization." "There are parts of the world where this model has not been extended, primarily places where you find 90 percent of the inter and intra-state violence, where governments have problems keeping leaders for two and three years or to get rid of them after 30 years. This notion that we are living in a world of fragmentation is inaccurate. We live in an era of unprecedented predictability and prosperity. Wars are less frequent and tend to be shorter," Barnett said. "The challenges we face today have more to do with the rise of the global middle class and the rise in consumption," he added.

At the panel titled "The EU and its Discontents: Is It The End of the European Project?," former European Union Commissioner for Enlargement and Neighborhood Policy Stefan Fule said solidarity and engagement were among the long list of issues needed to be addressed within EU member states. "Will the EU be an exclusive club? Or will it be an inclusive club with rules and conditions that are attractive for others?" he asked.