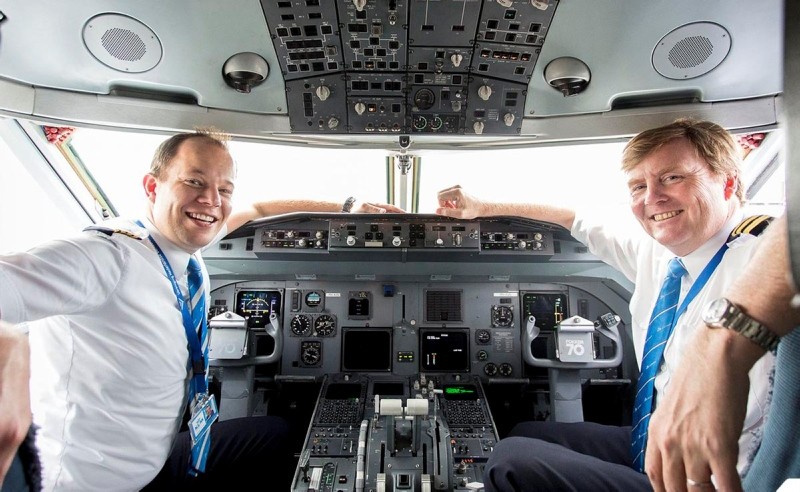 King of the Netherlands Willem-Alexander on Saturday co-piloted a commercial flight from Amsterdam to Istanbul.

The 51-year-old royal, who called flying his hobby, was behind the yoke during the Dutch flag carrier KLM's KL1613 flight to Atatürk Airport.

Willem-Alexander piloted a Boeing 737-700 aircraft with 131 people onboard.

No one but the crew was told about the king's presence before the flight. A few observant passengers in the front recognized the king, it was reported.

Can Ünsalan was one of those who recognized the king.

"It is not every day you are piloted by a king. It will be an unforgettable memory for me," he said.

He added that he knew from the media reports that the king worked as a pilot from time to time but never thought he would be one of his passengers.

"At first I was a bit concerned, knowing that he was a part-time pilot. However, it was a good takeoff and landing. I wrote him a letter, thanking him and asking for a photo of two of us. I handed the letter to his bodyguard. He communicated to me that he did not want to get his photograph taken and that he wanted to be known as a pilot not as a king on a plane."

When told after the two-hour, 50-minute flight that ended at 16:45, some passengers expressed shock. Many passengers said they were honored to have been flown by a king.

Wilma Elles, a German actress known for her roles in Turkish soaps, said, "A king brought me to Istanbul."

The Dutch king also co-piloted the return flight to Amsterdam.

King Willem-Alexander told national newspaper De Telegraaf in an interview published in May 2017 that he has ended his role as a regular "guest pilot" after 21 years on KLM's fleet of Fokker 70 planes and before that on Dutch carrier Martinair.

He now flies Boeing 737s as the Fokkers are being phased out of service.