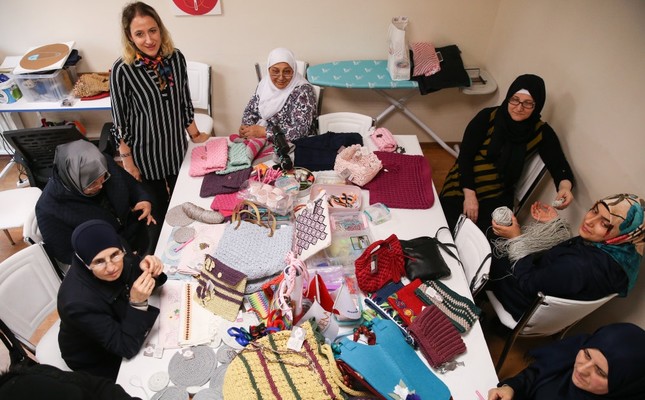 Syrian women knit at a center run by nonprofit Women and Democracy Center (KADEM) in Istanbul. Government and charities seek to help refugees to integrate and socialize through a string of projects including lifelong learning classes.

A report on migration shows Turkey's most populous city is home to the highest number of Syrian refugees, as one in every six resides in Istanbul

Turkey is home to more than 3.5 million Syrian refugees, and Istanbul has the most refugees, a report presented to Parliament recently shows.

The report prepared by the education authority that seeks to increase the number of Syrian students enrolled in Turkish schools indicates 559,058 refugees from war-torn Syria reside in Istanbul, roughly equal to one in every six Syrian refugees, followed by cities bordering Syria, including Şanlıurfa, Hatay, Gaziantep and Adana. Bursa, a city south of Istanbul follows Adana.

The report, compiled from numbers provided by the state-run migration authority, shows more than 3.4 million Syrian refugees were registered officially last year, and this number rose to more than 3.5 million as of Nov. 15. The report says 460,064 Syrians live in Şanlıurfa and 440,089 in Hatay. The top 10 cities cited host some 2.8 million refugees, while others are scattered around the country.

Since 2011, Turkey has received a constant flow of displaced Syrians fleeing the conflict and their numbers have expanded from mere thousands to millions. So far, Turkey has spent more than $30.2 billion on their well-being.

The conflict in Syria that started in 2011 has killed hundreds of thousands of people and forced more than 5 million people to flee, while more than 7 million are internally displaced. Refugees mainly took shelter in Turkey, Jordan and Lebanon with Turkey hosting the largest number of refugees. Some have sought to reach Europe via the Aegean and Mediterranean seas, but hundreds died en route to Greece and other littoral countries.

Management Authority (AFAD) has led the efforts to shelter refugees. Originally set up to help disaster victims, AFAD was tasked with accommodating refugees amid the Syrian crisis. At some 14 accommodation centers, including tent camps and modern prefabricated housing units, AFAD hosts 174,256 Syrian refugees. The rest either live in houses they rented or bought or in homes provided by charities in Turkey's 81 provinces. Modern camps provide refugees access to all basic services, from education to vocational training courses. Education is the main concern for refugees as youth and children make up the majority of Syrians taking shelter in Turkey.

Turkey has so far reached out to more than 610,000 Syrian children in its bid to provide them with an education. They attend public schools, schools run by charities and schools set up in some refugee camps.

Ankara has often criticized the international community for not providing sufficient humanitarian aid for the refugees in Turkey and not taking in more refugees.

Turkey also looks to ensure the safe and voluntary return of refugees to parts of Syria liberated from terrorist groups. So far, more than 281,000 people have returned home after Turkey launched its first cross-border operation in 2016 to back the Free Syrian Army (FSA) to save northern Syrian towns from the control of the terrorist group Daesh.

Share on Facebook Share on Twitter
Previous in Istanbul King of the Netherlands Willem-Alexander on Saturday co-piloted a... Next in Istanbul There's no doubt many employees and passengers will feel nostalgic...
DAILY SABAH RECOMMENDS