First ever prayer held at Turkey’s largest mosque in Istanbul 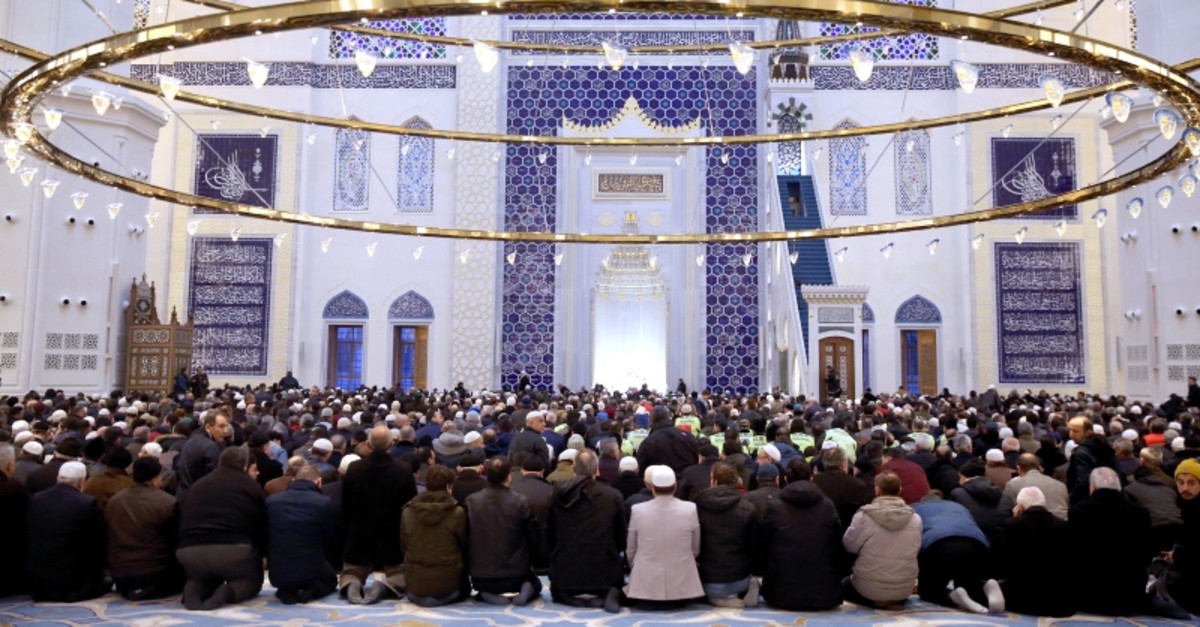 Dubbed Turkey’s biggest, Çamlıca Mosque opened its doors for the first time Thursday for prayers with hundreds filling the spacious place of worship situated atop a hill overlooking Istanbul

Hundreds of people attended the first ever prayer at the Çamlıca Mosque in Istanbul, following completion of its construction that started in 2013.

The faithful gathered at Turkey's now largest mosque complex before sunrise Thursday to perform a Fajr, or dawn, prayer.

Binali Yıldırım, Istanbul mayor candidate for the ruling Justice and Development Party (AK Party) as well as former Prime Minister and Parliament Speaker, joined the faithful at the Çamlıca Mosque for the prayer.

"It turned out to be a great work of art. The mosque is a magnificent piece of work that will add beauty to Istanbul's grandeur," Yıldırım said after the prayer.

According to Yıldırım, the first prayer was held to coincide with the Laylat al-Raghaib, the Islamic night of wishes marking the beginning of three holy months on the Islamic Hijri calendar: Rajab, Sha'ban, and Ramadan, which falls on the night from Thursday to Friday.

The foundation for the mosque, which is capable of hosting 63,000 faithful at the same time, was laid in August 2013.

Designed as a successor rather than a rival to grand Ottoman-era mosques like the famed Blue Mosque, Çamlıca incorporates the old and new in its architecture with traces of decoration and building styles from the Ottoman era and the pre-Ottoman Seljuk architecture. The mosque is located on the northern slope of the Çamlıca Hill, the highest point in central Istanbul. The mosque is situated in the middle of a 90-acre piece of land covered with greenery specifically to make it closer to nature, unlike other mosques in the city that are stuck amid the concrete jungle. A short walk from the mosque gives visitors a magnificent view of the Bosporus.

Apart from six minarets representing the six articles of the faith, its four minarets are exactly 107.1 meters tall, in a tribute to 1071 Malazgirt (Manzikert) victory of the Seljuks against the Byzantine army that cemented Muslim rule in Anatolia. Its 72-meter high main dome represents what builders say are the 72 nations who lived in the city.

The secondary dome has a diameter of 34 meters, after the license plate number for the city. The interior of the dome is inscribed with 16 adjectives attributed to Allah and 16 here also symbolizes the number of states founded by Turks in history. Atop the main dome is a three-piece finial that weighs 4.5 tons and at a height of 7.77 meters, the largest of its kind.

A 17,000-square-meter carpet rolled out at the mosque is a specially designed hand-knotted carpet. The minbar of the mosque, a pulpit from which sermons of Friday and religious festivals are delivered, is 21-meter high and can be lifted through an elevator.

The mosque can host eight funeral prayers at a time.

The Çamlıca Mosque will officially be inaugurated by President Recep Tayyip Erdoğan, according to Ergin Kulunk, head of the Remodeling and Sustenance Association of Istanbul Mosque and Culture Service Unit.

The association behind the mosque's construction, which consists of several donors, picked the mosque's design from 62 candidates and was ultimately inspired by the works of Sinan the Architect, a legendary Ottoman-era architect credited with beautiful mosques in Istanbul and other cities. The museum and art gallery are among the highlights of the mosque, separating it from its modern counterparts. The museum will host a number of artifacts and function in part as a venue run by the Topkapı Palace Museum.