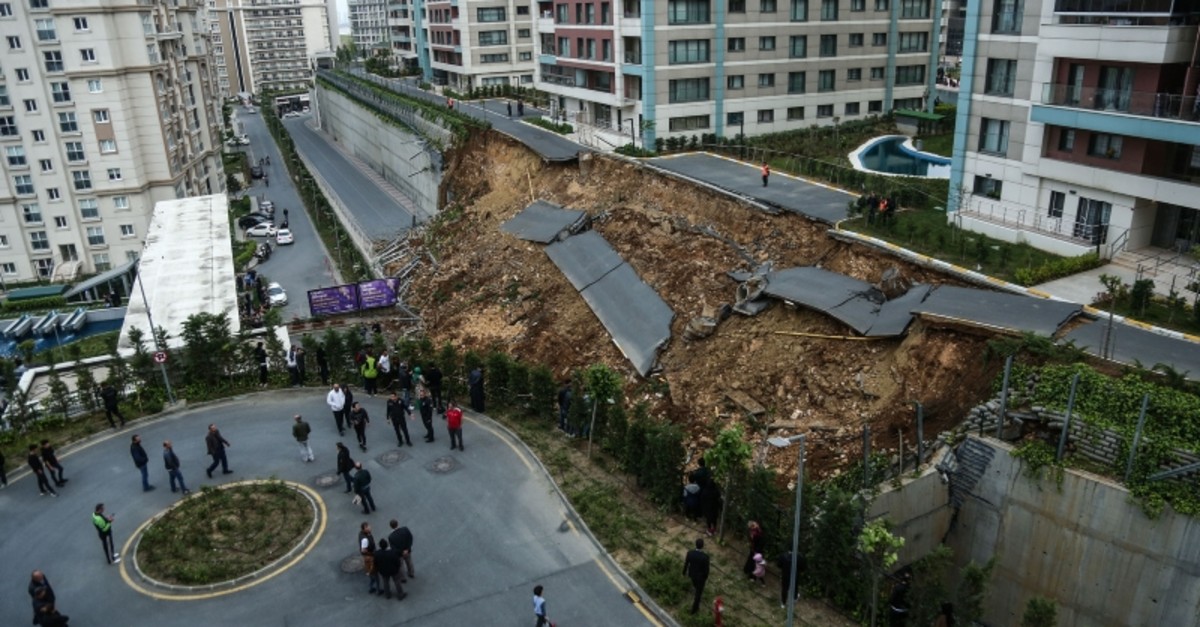 One person was killed and another injured after a retaining wall collapsed onto a car in Istanbul's Başakşehir district on Tuesday.

The wall separating a housing development complex and a street in Kayaşehir neighborhood suddenly collapsed in early evening, prompting a search and rescue effort for the two trapped inside a car under tons of soil and rubble.

Firefighter and Disaster and Emergency Management Authority (AFAD) crews found one person injured later in the evening, and eventually pulled the deceased, identified as Fatih Göztepe, from under the rubble.

The footage of the incident captured by a nearby security camera shows that the driver of the vehicle saw the collapsing wall and tried to maneuver to escape but could not.


Following the incident, locals told reporters at the scene that they had alerted officials to cracks in the wall but no measures were taken. In footage that emerged Wednesday and was reportedly captured a couple of days earlier, a child living in the housing development complex walks on the sidewalk and films the cracks between the road and the wall. In the video, the child says the cracks have grown larger since he last came, saying that the wall will collapse if it continues like this. He is then heard talking to the driver of a passing vehicle, warning the driver of the condition of the wall.

There are no construction sites in the area or heavy rains that could have prompted a landslide and collapse, as seen in similar incidents over the past couple of months.

Locals also told Demirören News Agency (DHA) that a couple of buildings in the area were evacuated as a precaution, but Başakşehir Municipality later said in a statement that the buildings in the area are safe and the retaining wall will be rebuilt after inspections by the municipality, Istanbul Metropolitan Municipality (IBB), the provincial directorate of the Ministry of Environment and Urbanism and AFAD.

Environment and Urbanism Minister Murat Kurum said the ministry launched an investigation into the incident.

In a much smaller scale incident, a 1-meter-long garden wall separating two buildings in Maltepe district collapsed onto parked vehicles early Wednesday, damaging four automobiles. No one was hurt in the incident, which could have injured adults and killed children and animals.

Back-to-back incidents related to building and construction security brought back fears for Istanbul residents who witnessed the fatal collapse of an apartment building in the city's Kartal district in February, in which 21 people were killed. The cause of the collapse was determined to be poor construction quality and illegal modifications. Seven buildings in the adjacent area were also demolished over poor building quality and damages during the collapse, and they are currently being rebuilt.

A four-story building in Kağıthane district collapsed on April 23, minutes after it was evacuated due to the collapse of the retaining wall of an adjacent construction site. The building was dangling on the edge of the construction site on a lower level before it tumbled down during a live broadcast. The retaining wall built after the ground was broken two years ago was apparently the only thing preventing the building from collapsing earlier. Ten buildings around the collapsed building were evacuated and later demolished to be rebuilt.

Four days later, cracks appeared on streets in Esenyurt district, prompting evacuations in 25 nearby buildings. Locals said a low-pace landslide had been underway in the area for some time due to a large construction site nearby and rainy weather in recent weeks.

In another incident last year in Istanbul's Beyoğlu district, a four-story building came crashing down after the retaining wall of a nearby construction site collapsed in heavy rainfall.

The incidents also raised concern about the country's problem with illegal construction and were interpreted as a warning sign against earthquake risk.

The Ministry of Environment recently announced that a citywide examination is underway to improve construction safety and detect and take measures at construction sites where work has stopped.