Restored Byzantium-era palace to serve as museum in Istanbul 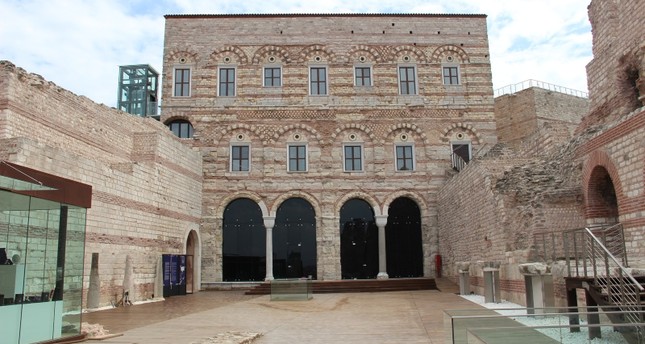 Restoration on a Byzantium-era palace located in Istanbul which is the only remaining part of the Blachernae Palace Complex was completed and the palace will start serving as museum starting from Monday.

The historic complex which is located in the Edirnekapı region of the Fatih district on the city's European side, will host an organization called "Istanbul Craft Week" on Monday and then will start to serve as a museum as the restoration initiated by the Istanbul Metropolitan Municipality (IBB) was completed.

During the Ottoman rule in the region, the palace also served as an arts and crafts center where a variety of arts were performed and offered various trainings including pottery, glass and tile arts.

Replicas of the pottery, glass, and tile crafted during the Ottoman era will also be displayed at the palace turned museum.

The museum will use latest technology to offer its visitors a different experience with interactive and digital applications while holograms will explain the palace's history of pottery.

The Palaiologan Palace, known as "Tekfur Sarayı" in Turkish, which means feudal landlord palace as it once belonged to the Byzantium emperors, is the only remaining part of the Blachernae Palace that was built upon the order of the Emperor Theodosius the Second and was used between 11th and 15th centuries.

The Blachernae Palace was initially built on the northwest corner of then-Constantinople, overlooking the Golden Horn.

Share on Facebook Share on Twitter
Previous in Istanbul Trekking in the nature over the weekend is a luxury for most Istanbulites... Next in Istanbul With new smart transportation systems and improvement of metro lines,...
DAILY SABAH RECOMMENDS