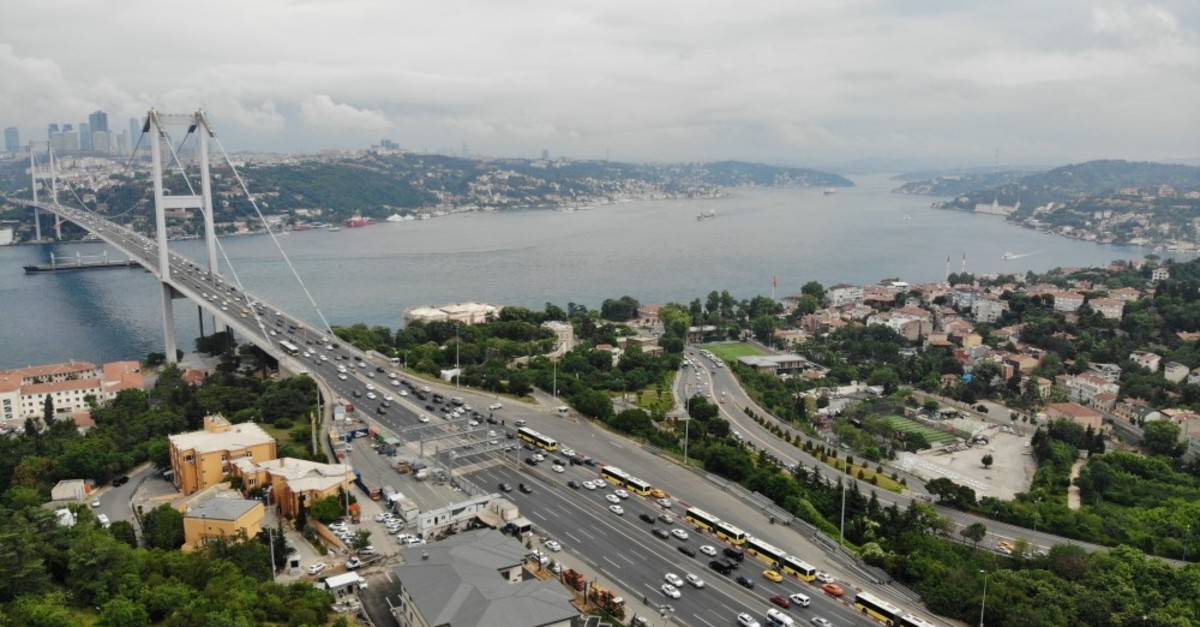 An aerial view of the July 15 Martyrs Bridge, formerly knowns as the Bosporus Bridge, which is among the city's most congested areas.
by Jun 17, 2019 12:24 am

With new smart transportation systems and improvement of metro lines, Istanbul's traffic chaos has decreased by 6%, a new survey reveals

Despite the annual increase in population and the number of vehicles in Istanbul, the Istanbul Metropolitan Municipality's (IBB) investments in transportation and introductions of smart solutions have reduced traffic congestion by 6%.

TomTom, regarded as one of the world's leading traffic data providers, prepared its annual report by collecting GPS data from in-car navigation devices in 403 cities in 56 countries on six continents. According to the report unveiling Istanbul's traffic index, traffic congestion fell from 59% in 2017 to 53% in 2018. Thanks to the Istanbul Metropolitan Municipality's ongoing rail system projects, it is envisaged that the traffic congestion will be further relieved in coming years.

Smart transportation systems, rail systems and interconnected public transportation services undertaken by the Istanbul Metropolitan Municipality with the vision of smart urbanization have relieved Istanbul traffic to a great extent. According to the traffic index published by TomTom, which monitors traffic densities of big cities in the world, the traffic congestion in Istanbul is on the decline despite the continuous increase in population and the number of vehicles in the city.

The traffic index report announced by the Netherlands-based company calculates the extra time drivers spend all year at the wheel. In TomTom's study, traffic congestion in 403 cities in 56 countries was analyzed. An international survey published by the same company last year on https://www.tomtom.com/en_gb/traffic-index/istanbul-traffic#statistics also indicates that Istanbul's traffic congestion dropped by 6%.

Meanwhile, 15 rail system lines, 11 undertaken by the İBB and four by the Ministry of Transport and Infrastructure, are being constructed throughout Istanbul. With the commissioning of rail system lines, traffic congestion in Istanbul should further decrease in coming years.