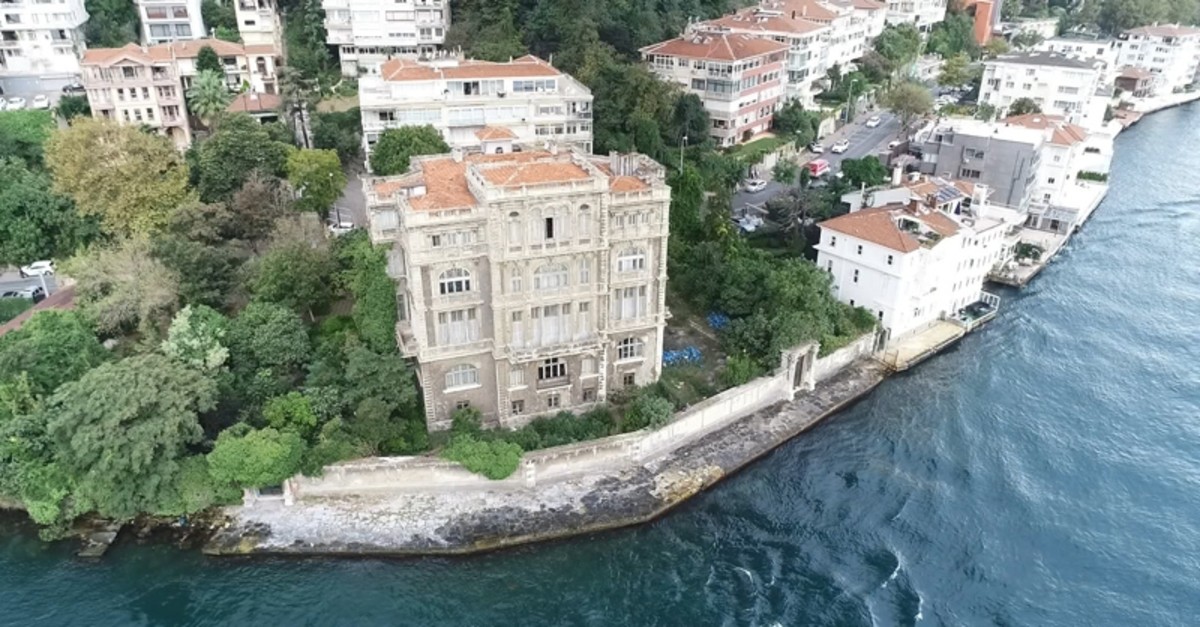 An Istanbul waterside mansion in which the grandfather of newly-elected British Prime Minister Boris Johnson once lived has been put on sale for 550 million Turkish liras ($96.2 million).

Named the Zeki Paşa Waterside Mansion, the chateau-like house is considered to be one of the most expensive real estates in the world.

It was built for Ottoman field marshal Muşir Zeki Paşa, and different families lived in it over time.

Featuring a panoramic view of the Bosporus from the Rumelihisarı district on the European side, the mansion has 23 bedrooms and eight bathrooms spread along five floors. It is currently the largest seaside mansion along the Bosporus.

Tourist guide and historian Saffet Tonguç told broadcaster NTV that the mansion was constructed by French-Ottoman Architect Alexandre Vallaury in the second half of the 19th century.

Ali Kemal, who was one of Zeki Paşa's son-in-laws and is the great-grandfather of British Prime Minister Boris Johnson, had also lived in the mansion, according to Tonguç.

Ali Kemal was an Ottoman journalist and politician, and regarded as a controversial figure in Turkey. During a trip to Switzerland, Kemal met an Anglo-Swiss girl, Winifred Brun, the daughter of Frank Brun by his marriage to Margaret Johnson, and the two were married in Paddington, London in 1903. A staunch liberal, Kemal opposed Sultan Abdulhamid II's rule and spent many years in exile until the proclamation of the Second Constitutional Era in 1908. From that point on, Kemal was an ardent opponent of the hawkish Committee of Union and Progress (CUP), the leading revolutionary group. As the CUP consolidated its power by defeating the counter-coup on March 31, 1909, Kemal fled to Europe and spent three years in exile, during which Johnson's grandfather Osman Wilfred Kemal was born while Winifred died shortly after.

Kemal returned to Istanbul in 1912 and remained in opposition to the CUP, which remained in power until October 1918. In 1919, as Istanbul and various parts of the empire were under occupation by the Allied Powers, he served for three months as interior minister in the government of Damat Ferit Pasha, a disliked figure for his close cooperation with occupation powers and nationalists led by Mustafa Kemal in Ankara. Kemal was a leading opponent of the 1919-1922 Turkish War of Independence in the Ottoman press. On Nov 4, 1922, he was kidnapped by nationalists in Istanbul to be brought to Ankara to stand trial for treason charges, but the group was intercepted by First Army Commander Gen. Nureddin Pasha in Izmit two days later. Branded a top traitor in Anatolia, Kemal was lynched to death by a mob set up by Nureddin.

After Kemal's return in 1912, Osman Wilfred Kemal and her sister Selma remained in England and adopted their maternal grandmother's maiden name Johnson, although Selma later returned to Turkey. Osman later went by the name Wilfred Johnson and married Irene Williams, who gave birth to Stanley, the father of Boris.

There are some 600 waterside mansions along the Bosporus, with 366 of them having protected status, which requires official approval before any renovations.

Only three of these mansions have not changed owners since their construction, Tonguç noted.