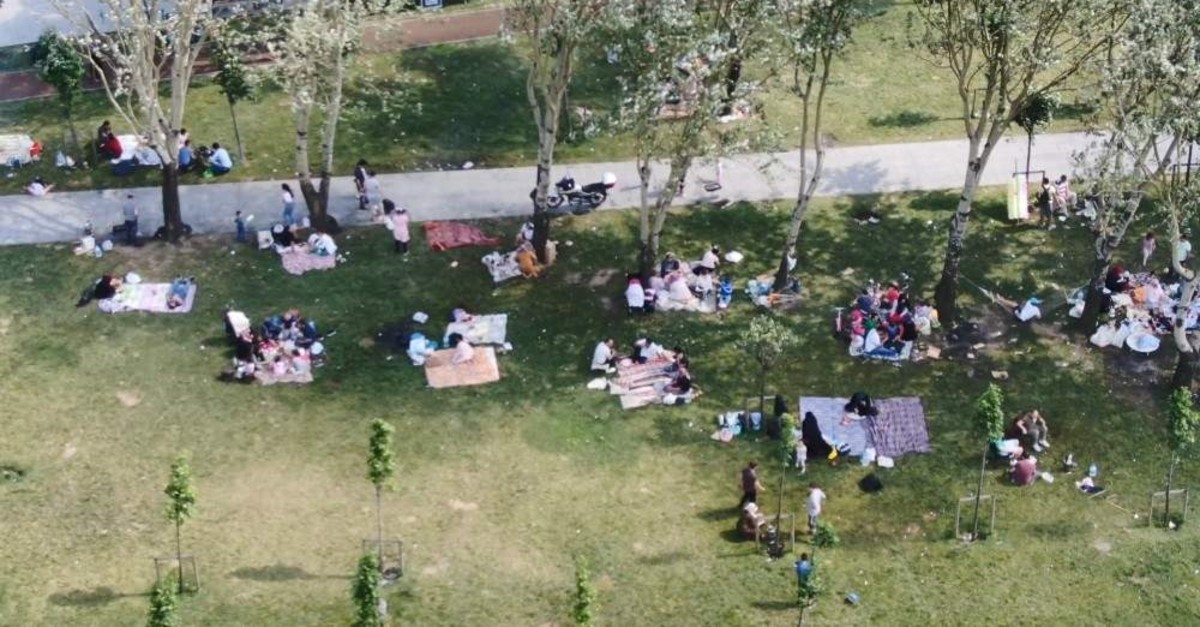 Many Istanbulites who oppose the proposed barbeque ban say it is a part of their culture. (DHA)
by Daily Sabah with DHA Oct 20, 2019 9:42 pm

Following Istanbul Mayor Ekrem İmamoğlu’s statements about a possible ban on barbecues along the city’s shores, citizens had mixed opinions on the issue, many remaining distant to the idea.
"We already did it in Beylikdüzü [a district in Istanbul where İmamoğlu once served as mayor] and saved the shore. We plan to do it throughout Istanbul. Barbecuing on the shore is not right. Smoke from barbecues affect its surroundings, they do not only affect the area they are being held, but also cover a 200 meter area around it,’’ İmamoğlu told reporters last week.
The statements caused some controversy among the city’s inhabitants; while some agreed with the ban, others argued that the shores were the only places left in the city to conduct such activities.
Currently, there are no clear indicators on whether the ban will come to pass or not.
Recep Kenar, a citizen who says he spend his weekends barbecuing on the Zeytinburnu shore, says, “I don’t know where we can have them if not here. They need to think about that first, before exercising any types of bans. We need more green spaces.”
Another citizen thinks that there should be special areas that are designated specifically for barbecues instead of a complete ban.
“The decision might prove to be partially true for some parts but would not be applicable everywhere. Barbecues are the only entertainment alternative for some sections of the population during days off or weekends. So banning it wouldn’t be entirely right.”
‘’I’m 42 years old and I have lived in Zeytinburnu for all 42 years of my life. I visit the seaside on the weekends. What I see is that it is full of trash. I don’t think that we need bans as long as we can manage to live civilly. Another alternative would be to specifically designate areas for barbecuing. Different solutions can be implemented, it can be done in some areas, not on the grass. This kind of application would be a lot better than a full ban,” he said.
More citizens were against the ban, stating that barbecuing is a part of their culture.
“This is our culture. We come here on the weekends to have fun. We are kids, we don’t have anywhere else to go so we come to the seaside,’’ said Tayfun Kaplan.
On the flip side, some citizens were entirely for the ban, as they voiced their discontent with the consequences of people barbecuing on the shores.
“I think it would be the right call. People leave a mess once they’re done. The sight bothers me when I’m on my walk. I’m uncomfortable with the smell, the smoke and the mess they leave behind. I support a ban,” said Emine Karaşen.
Hasan Göksu, who says he too is disturbed by the smoke and the bad smell on Zeytinburnu’s shores, also weighed in on the matter.
“It should be banned because it’s not nice. They are annoying other people. The smell is bad enough, let alone the mess. I’m all for the ban. They’re barbecuing on the grass, throwing the burnt coal on the ground. They also throw their leftovers on the ground. The whole place smells like a dumpster,” he said.