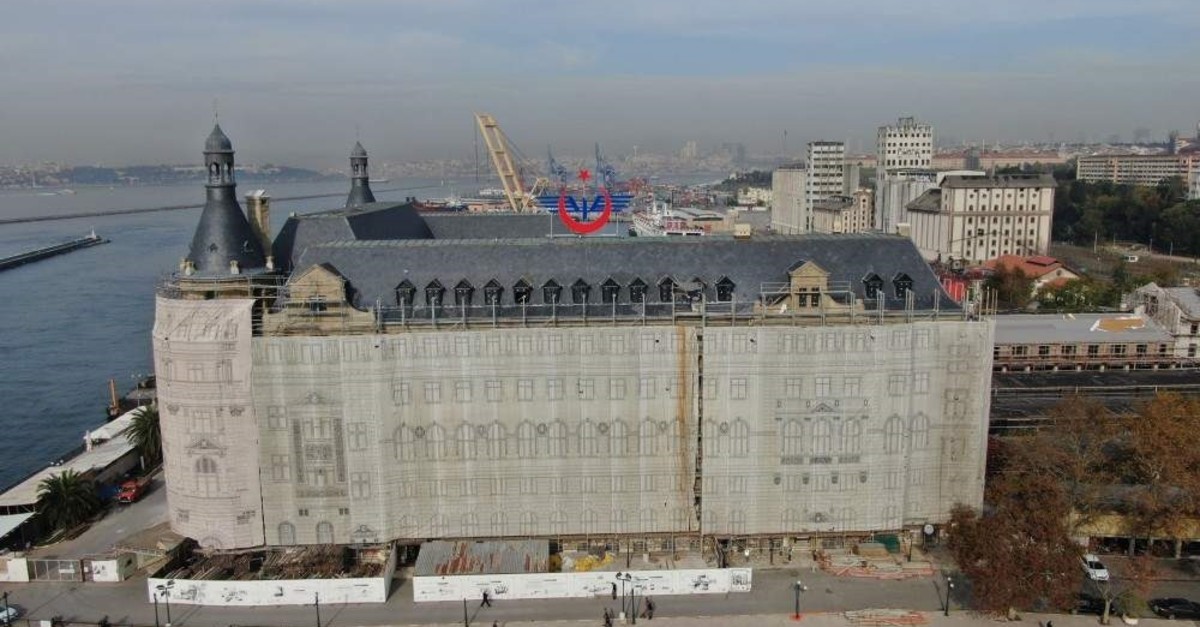 The three-year-long restoration at Istanbul's landmark Haydarpaşa Train Station is officially coming to an end and the large clock welcoming passengers for decades has started ticking again after nine years of silence.

Repairs on the 111-year-old station's roof, which was heavily damaged in a fire in 2010, were completed earlier in January. Work is ongoing on the building's granite facade, currently under a decorative curtain, as well as its foundation, load-bearing columns in the basement and its landscape.

The station, built in 1908 to serve as the western terminus of the Ottoman Empire's ambitious Hejaz and Baghdad railways, has been closed to passengers since June 2013 when suburban rail services stretching to the Gebze district of Kocaeli province were annulled for the Marmaray project. Featuring a submerged train tunnel crossing the Bosporus and revamping the old suburban rail lines to increase train and passenger capacity, the Marmaray bypasses the historic Haydarpaşa and Sirkeci stations. Intercity trains to Anatolia were also scrapped a year earlier over the ongoing construction for a high-speed train.

Following the 2010 fire, which broke out during repairs, a temporary protective roof was placed to protect the building from rainfall and snow. Several projects were made public over the years to reassess the building's use as a hotel with a larger convention center project in the surrounding rail facilities. Following calls from the public, the Turkish State Railways prepared a thorough restoration project for the building to be used as a station, which was approved by the Kadıköy Municipality and the Council Monuments in 2016, giving the green light for the restoration.

Experts then used georadars to capture images from the station's iron load-bearing system – placed over 20-meter-long wooden stakes holding the muddy ground together – to assess the damage inflicted to the building over time.

The station was inflicted severe blows throughout its history. On the first day of its opening, a fire broke out and it was reopened on Nov. 4, 1909 after a restoration process. The station was used as an armory during World War I, but was damaged on Sept. 6, 1917, when the armory exploded. The station completely collapsed after that.

On the 10th anniversary of the founding of the Turkish Republic, the station was rebuilt to its original state and a comprehensive restoration was also carried out in 1976.

In 1979, certain sections of the station were damaged during the Independenta tanker accident, in which a Romanian crude oil carrier exploded after colliding with a Greek freighter on the Bosporus off Haydarpaşa Port. The explosion shattered windows in various parts of Istanbul, also causing significant damage to the station. Independenta's wreck burned for weeks, causing heavy air and sea pollution around Istanbul and throughout the Marmara region.

When the restoration work is completed, the station is expected to serve as the terminus for several intercity trains and suburban services.