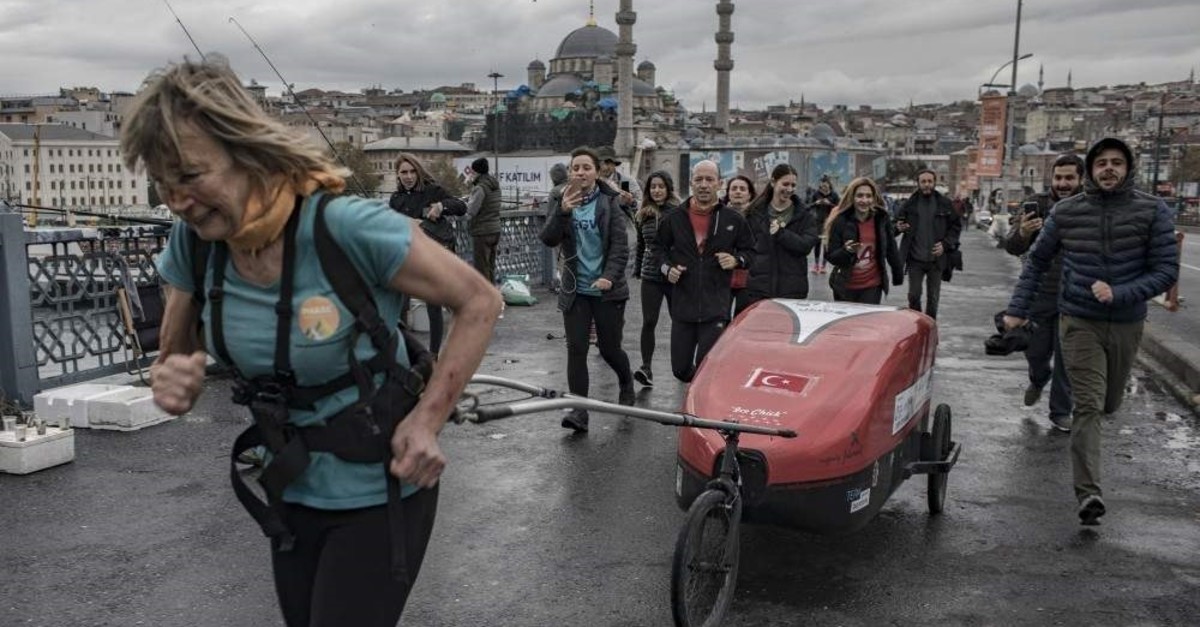 A British adventurer and author crossed Istanbul's iconic Galata Bridge Thursday on her 6,000-mile journey from the U.K. to Nepal to raise money for needy people in the South Asian country.

Rosie Swale Pope, 73, is running solo to support U.K.-based charity PHASE Worldwide, which empowers isolated communities in Nepal, pulling everything she owns in a red cart behind her.

"I am honored to be in Turkey and have the love of the Turkish people," Pope told Anadolu Agency during her stop in the city.

"I am able to do this because I am quite young," she said light-heartedly. "I am only 73 years old, but I have to do it while I can."

Sharing a video of herself running on the Galata Bridge, which spans the Golden Horn, an ancient harbor in the city, she tweeted: "Is it a bird? Is it a plane? No! It's me running across Galata Bridge on a 6,000-mile journey across the world from the UK to Nepal, pulling everything I own in a cart behind me."

The adventurer, who is also the author of the book "Just A Little Run Around the World: 5 Years, 3 Packs of Wolves and 53 Pairs of Shoes," thanked those joining her on the bridge.

"It was so wonderful to be met by so many friends. Your kindness is not lost on me. I will carry it with me as I continue my run to Kathmandu, Nepal," she said.

"Such a beautiful day. I am so grateful that I can take my home with me to such wonderful places. #RosieRuns (PW)," she also wrote on Twitter, sharing an image of the city's Sultanahmet district.

"Like many people, if you are doing something that you believe in with all your heart, you can do it," she said in the interview: "And I have to do it while I am alive."

"The idea is that every person in the world deserves the chance to make the best of the life they have, however hard it is."

Although Pope sometimes stays at hotels, she said she spent last night in a field in her red cart, which she pulls using a special harness while running.

She praised Turkey as she had gained over 2,000 Twitter followers from the country since walking across the border from Greece in November.

"I already have more than 2,000 new Twitter followers who are Turkish, so I say Teşekkür ederim (thank you in Turkish). You are super, Maşaallah," she said.

The adventurer plans to visit her hometown for a week after her brief stop in Istanbul.

"Then I'm running to Ankara, Georgia, Azerbaijan," she said.

Throughout her life, Pope has been involved in numerous marathons in "some of the world's most challenging terrains and has embarked upon many adventures including trekking across Chile on horseback and sailing across the globe in a small boat," according to PHASE Worldwide's website.

"For many years, I have been a patron of this (PHASE Worldwide) charity, because it was when my husband was going to go to Nepal, and then he sadly died from a long-term illness," she added.