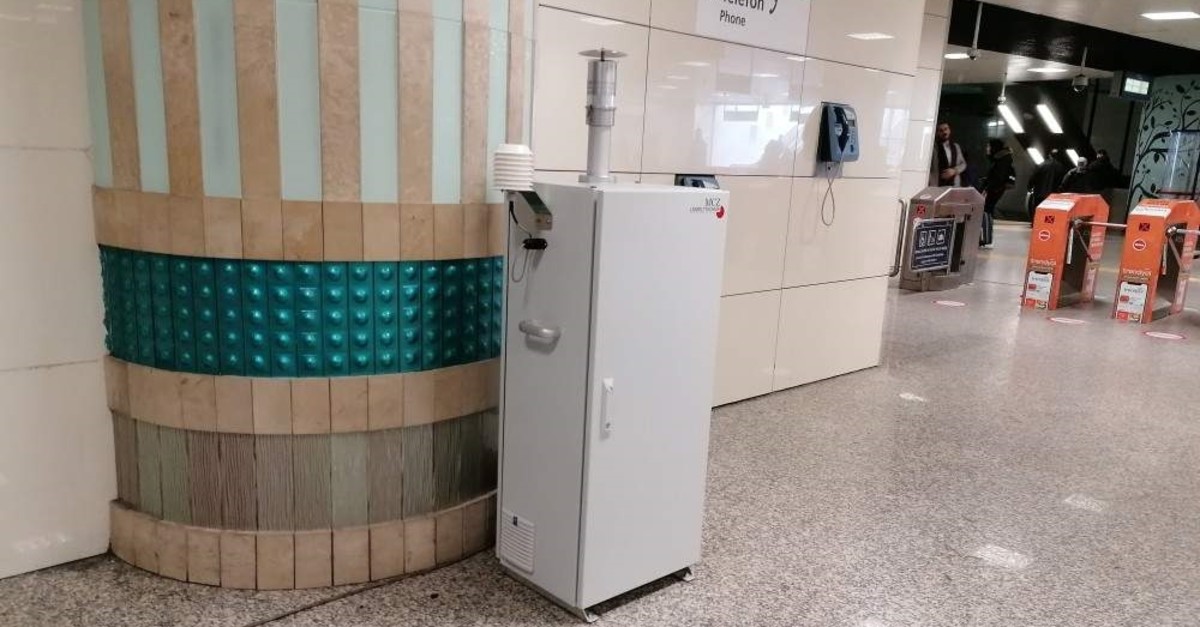 An air quality measurement device installed at a metro station in Istanbul, Dec. 9, 2019. (AA Photo)
by Daily Sabah Dec 09, 2019 6:13 pm
Metro Istanbul, which runs the metro services in the city, joined forces with Istanbul municipality's environmental agency to improve air quality in metro services.
The city's expanding metro network came under fire over claims of polluted air. Metro authority officials have rejected the claims of a Turkish professor who advised passengers with dust allergies to wear masks while riding the subway due to polluted air in the stations.
The municipality announced Monday that air-related data collected from metro cars and stations will be analyzed. Particulate matter deemed harmful will be destroyed "at its source," the municipality said in a statement. The statement said PM10 values will be reduced in metros.

Mikdat Kadıoğlu – a professor at Istanbul Technical University's Faculty of Aeronautics and Astronautics in the Meteorological Engineering Department – said in July that he tested the air quality at subway stations and found that the pollutant levels were three times over the limit recommended by the World Health Organization (WHO). The WHO recommends that the PM 2.5 average not surpass 25 micrograms per cubic meters, while the PM 10 average should not surpass 50 micrograms per cubic meters. Kadıoğlu said that in the Üsküdar subway station the PM 2.5 levels hit 87 micrograms, while the PM 10 levels hit 124 micrograms. Inside the subway car, the PM 2.5 levels hit 49 micrograms, well beyond the limit set by WHO.
Officials say air quality is regularly tested and large fans are installed for the evacuation of dirty air. İsmail Adıyıl, energy and environment department head of Metro Istanbul, said they would work to improve the air quality further. Bahar Tüncel, an environmental engineer for the municipality's environmental protection directorate, said they tested pollutants in 26 stations, adding that six stations along the Yenikapı-Hacıosman and Kadıköy-Tavşantepe lines will be checked for pollutants in 10-day periods. "We look to check the quality of air that passengers and metro staff inhale and want to bring the air quality values to a level higher than current standards," Tüncel said.