Safety concerns renewed after freighter runs aground in Bosporus 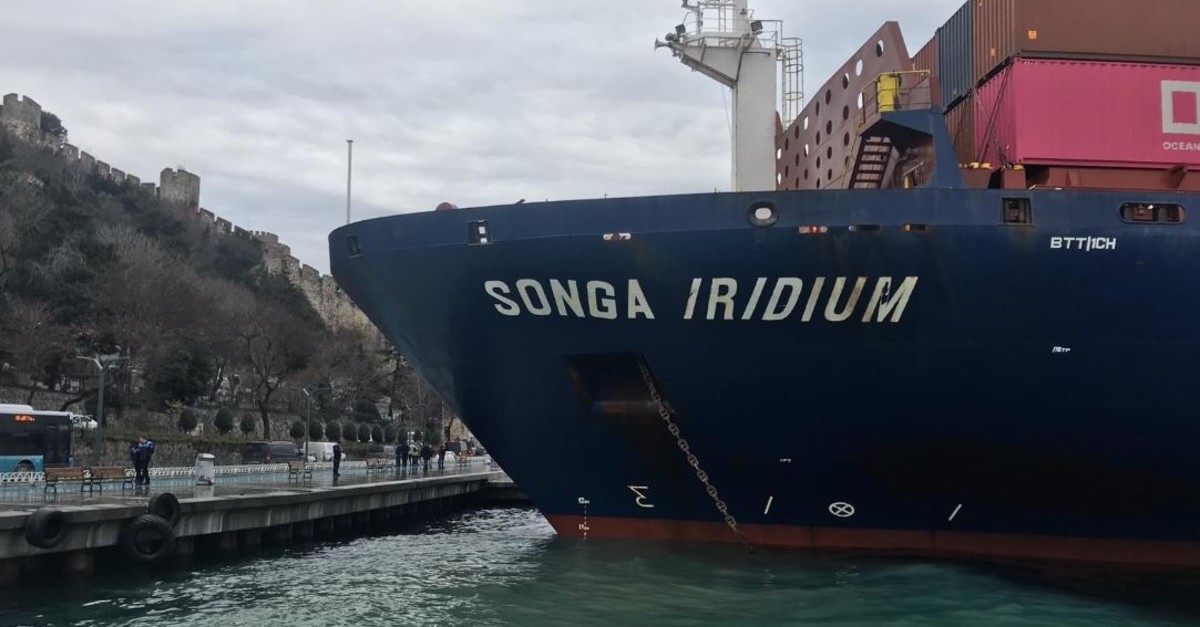 Istanbulites once again questioned maritime safety on the Bosporus on Friday after a freighter ship that lost control was only able to stop at the last minute, barely avoiding disaster

A Liberia-flagged cargo vessel ran aground in Istanbul's Bosporus strait on Friday due to a malfunction on board that caused a loss of control, triggering fears about dangers the ships in narrow waterway pose to residential areas on the shores.

Realizing the imminent danger, the captain of Songa Iridium released the anchor, stopping the ship barely on time and avoiding a potential collision as the 191-meter long ship came into contact with land near the Rumelihisarı neighborhood.

The freighter was pulled and rescued by tugboats after the captain reported the ship was in no danger of sinking, while no injuries or casualties were reported.

Issuing a statement after the incident, the Istanbul governorate said the ship coming from Ukraine's Odessa ran aground at 12:13 p.m. after encountering a mechanical problem at 12 p.m.

"No crew member or people on the ground were injured after the accident. The tug boats have begun rescue operations. As of right now, there are no signs of environmental damage or pollution," the statement said.

The governorate also said the Bosporus was closed to naval traffic after the accident.

The incident came at a time when discussions about Turkey's Kanal Istanbul heated up after President Recep Tayyip Erdoğan said the project would begin soon. While activists say that the new canal would pose a threat to the environment, officials have been arguing that giant freighter ships navigating the narrow waters of the strait have been a far greater threat to citizens living in the city as the Bosporus has seen similar accidents in the past.

Turkey's straits are among the most at-risk waterways in the world, according to experts.Thousands of vessels, including tankers carrying highly flammable oil, pass through the Bosporus, an S-shaped channel with sharp turns and changing currents that pose challenges for vessels and sailors every year. In compliance with the 1936 Montreux Convention, Turkey must allow open access for all civilian vessels through its straits in peacetime. However, accidents concern the country. From 1953-2003, 461 accidents occurred on the Bosporus.

The deadliest accident was when a Romanian tanker and a Greek freighter collided and exploded in November 1979, killing 42 crewmembers aboard the Romanian tanker. The last major accident in the strait was in 2003 when a Georgian-flagged vessel ran aground, resulting in a spill of 480 tons of oil.

To change the course of vessels with potentially dangerous cargo, the government plans to build the Kanal Istanbul, an ambitious project to construct a channel through the city's European side.

The main purpose of the project is to reduce marine traffic through the Bosporus and to minimize risks and dangers particularly associated with tankers. International pressure is growing to increase marine traffic tonnage through Turkey's straits, which brings risk for the security of marine navigation during passage.

Arguably, the new channel would further help prevent pollution caused by cargo vessels passing through or mooring in the Marmara Sea at the southern mouth of the Bosporus.

Speaking at a conference Thursday, Environment and Urbanization Minister Murat Kurum said the project will stem the rising risk posed by ships carrying dangerous goods via the Bosporus.

Kurum also stressed that the Environmental Impact Assesment Report on the Kanal Istanbul project was sedulously prepared, and the project will be carried out with due diligence in regard to all of the environmental concerns.

The canal will redirect ships away from settlements and ships will have an easier time navigating in a wider body of water. Planned to cost around TL 75 billion, the canal will have a larger capacity allowing more vessels to cross and reduce wait times for ships looking to cross the strait. According to the minister, ships are waiting close to 14 hours to pass through the Bosporus, while waiting time for ships carrying dangerous loads such as tankers reaches 30 hours.

Kurum also pointed to the financial burdens that occur due to waiting. “According to 2017 figures, economic losses arising from the waiting periods tankers faced reached millions of dollars. A daily rental loss of tankers over 200 meters in length reaches $120,000 on average. Under favorable conditions, a ship of a length of over 200 meters passes through the Bosporus strait in about one and a half hours,” said the minister. Considering the waiting periods, there is a significant increase in the total transit costs, Kurum noted. “This will encourage ships to prefer Kanal Istanbul,” he added.