2014 was a productive year for reconciliation process, says gov’t 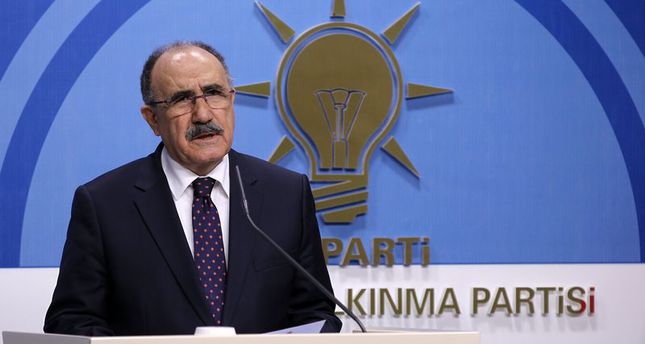 As the government and HDP showed their determination to successfully end the Kurdish issue, AK Party spokesman Atalay said yesterday that an additional road map is not necessary for the process

Justice and Development Party (AK Party) spokesman Beşir Atalay said that the government's reconciliation road map consists of a comprehensive law that includes six articles in total. He made the statements following the AK Party's Central Decision and Executive Board (MKYK) meeting on Tuesday. "An additional road map is not necessary for the reconciliation process," Atalay said in response to a question asking if the government will introduce a new reconciliation package prior to the 2015 general elections. Atalay said that the current framework successfully addresses all issues regarding the resolution of Turkey's Kurdish issue.

Referring to the legislation as the "constitution of the reconciliation process," Atalay said that the law was passed with 80 percent support from Parliament in July.

Deputy Prime Minister Bülent Arınç also made remarks over the clashes between rival Kurdish groups in the Cizre district of southeastern Şırnak province on Dec. 27 and reiterated that three people lost their lives and five people were injured during the incident.

Arınç said: "Public order in Cizre compared to the clashes over the weekend has been maintained. These incidents showed that those who are fed by terrorist activities in the region are still annoyed with the reconciliation process and they cannot be tolerant of differences in the region."

Arınç added that the situation in the region is under control and the government will continue its determination to prevent any harm to the reconciliation process by clashes like this.

The clashes that started on Saturday in Cizre killed Yasin Özer, Abdullah Deniz and Barış Dalmış and left three others wounded. Late on Saturday a group of masked people in the town of Silopi in Şırnak province protested the Cizre clashes and closed off İpekyolu Road. Two people were injured in the protests and police used tear gas and water cannons to disperse the groups.

"Through social media and some broadcasting, certain circles tried to stir up incitement by creating an image of 'there is no control, only chaos in Cizre,' " Prime Minister Ahmet Davutoğlu told journalists regarding the incidents.

Peoples' Democratic Party (HDP) Co-Chair Selahattin Demirtaş said that the Cizre clashes were a plot by agents who infiltrated the anti-PKK Free Cause Party (HÜDA PAR) and PKK-affiliated groups to cause tension in the region.

Earlier in October similar clashes and protests erupted on Oct. 6-7, the Kobani demonstrations, resulting in some 40 deaths. They started when the Syrian border town of Kobani came under attack by the Islamic State of Iraq and al-Sham (ISIS) and it was alleged that the Turkish government was not doing enough to help the town's Kurdish defenders. The HDP called for street protests to show support for Syrian Kurdish fighters defending Kobani.

Reconciliation talks stalled after the Oct. 6-7 Kobani demonstrations. Dozens were killed in the protests, which included pro-PKK groups, who felt there was a lack of government support for Kurdish forces defending Kobani against ISIS. Even though the demonstrations harmed the government's trust in the HDP and other parties involved in the protests, Davutoğlu announced on Tuesday that everything was back on track. The two sides, having shaken off provocations that have damaged the reconciliation process, are clinging to the hope that a resolution will soon be reached.

The reconciliation process, which aims to end the decades-long conflict with the PKK, which took up arms against Turkey in an attempt to carve out an independent Kurdistan in the southeastern region, was expected to yield results in the upcoming months, possibly in February. Yet, the government took a firm stance after the Kobani protests by saying that public order is the first priority and the reconciliation process is not an alternative under any circumstances.