No compromise if PKK returns to arms, says PM Davutoğlu 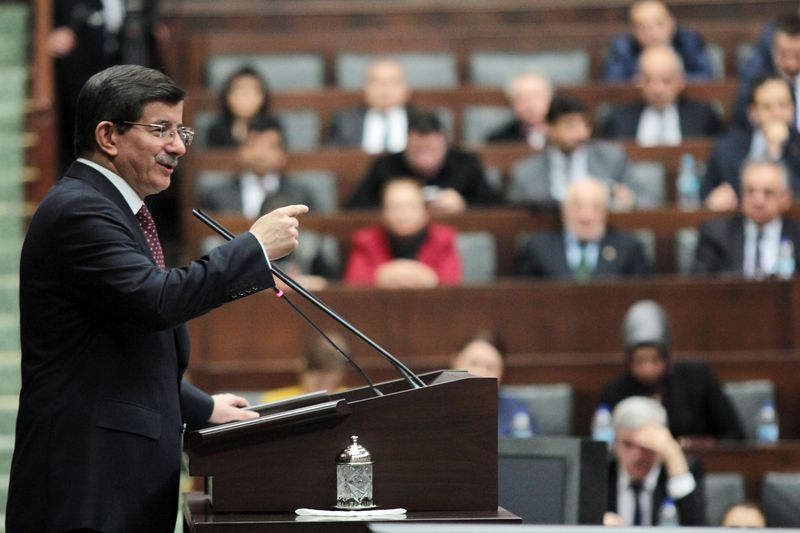 by Nurbanu Kızıl Mar 02, 2015 12:00 am
Prime Minister Ahmet Davutoğlu said that the government will not make any concessions if the use of arms is brought to the table, as he underlined that public order is an indispensable part of democracy and cannot be sacrificed.

Davutoğlu spoke at the Justice and Development Party's (AK Party) Parliamentary Group meeting on Monday and underlined that Turkey has covered a lot of ground in terms of transforming the state's military-dominated identity into an independent and civilian model where the elected government is the sole authority not subjugated by the military. He said that the government showed its hard power in the recent Operation Shah Euphrates, its soft power in the reconciliation process and democratic developments and its economic power in large projects like the third airport in Istanbul and the sub-aquatic tunnel project.

"The ultimate goal of the government is to create a sense of belonging and unity in all citizens," Davutoğlu said, adding that the government is open to discussing all issues under the scope of a democratic framework. He added: "A new era is unfolding in Turkey that has a new mindset about citizenship and equal rights enabled by the government embracing all citizens."

He said that terrorism has come at a high price for Turkey as over 35,000 citizens have been killed in the past three decades. He stressed that the funds used to fight terrorism could have been used for development initiatives throughout the country. However, he went on to say that it is still not too late and the AK Party government is doing its best to take constructive steps toward the resolution of the Kurdish Issue.

He said that the PKK's imprisoned leader Abdullah Öcalan's call for disarmament is a new step and the end to violence will enable people to have a sense of belonging in terms of history and citizenship. Conducting politics in a democratic framework will ultimately put an end to violence, according to Davutoğlu.

He said that when people realize they are sharing a common future, they will embrace one another as brothers and sisters, which will ultimately prevent conflict and division.

Davutoğlu also called on opposition leaders to take a firmer stance and embrace the reconciliation process rather than criticizing it just for the sake of creating opposition. He said that the Republican People's Party (CHP) initially welcomed the call for disarmament, but has not expressed a determined stance yet.

He harshly criticized Devlet Bahçeli, the chairman of the Nationalist Movement Party (MHP), for exploiting the situation for political interests by criticizing the call for disarmament. "National unity can only be possible by a common sense of belonging," Davutoğlu said addressing Bahçeli.
Davutoğlu also announced that he is starting a "greeting campaign" and called everyone to greet each other on June 7 when they go out to cast their ballots regardless of the party they are voting for.

The government has prepared the Domestic Security Reform Package in efforts to establish a balance between freedom and security of its citizens while enhancing the civilian identity of the state. Politicians, including Davutoğlu, have consistently said that the government will never sacrifice public order as democracy and stability cannot exist without it.