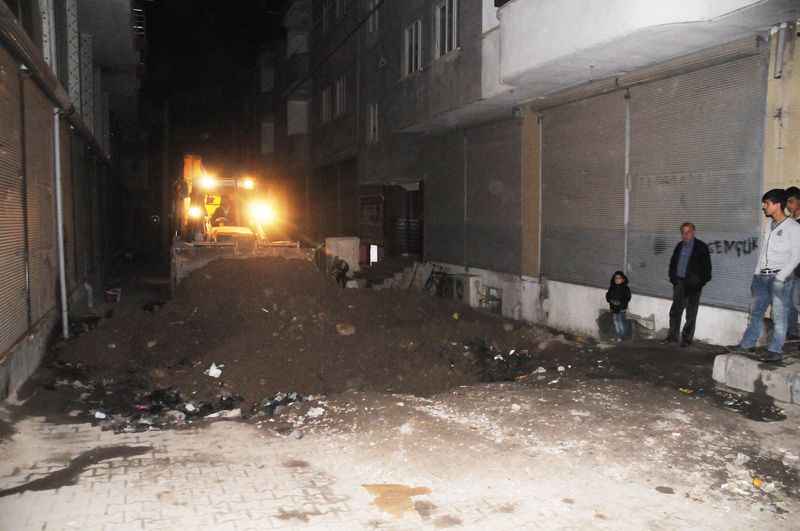 by Daily Sabah Mar 03, 2015 12:00 am
The ditches that were dug by members of the terrorist organization PKK's youth wing in Cizre, a district in eastern province of Şırnak, have been closed. The ditches were originally dug to prevent police control in the area where heated clashes were taking place.

Dozens of ditches were dug by PKK's youth wing, YDG-H, in a bid to prevent police control in some neighborhoods during the deadly Kobani protests, which erupted out of a demand for the government to give more support to Kurdish fighters in Kobani when it was besieged by ISIS. Some of the ditches had already been closed after the Kobani protests, which broke out on October 6, 2014 and lasted for two days.

Propelled by a call from the pro-Kurdish People's Democratic Party (HDP), the protests turned into a violent conflict between pro-PKK groups and supporters of HÜDA-PAR, a party which claims to have ties with the former Kurdish Hezbollah, PKK's arch enemy.

The protests were staged under the pretext of being against Turkey's foreign policy and stance against the Islamic State of Iraq and al-Sham's siege of the Syrian town of Kobani and killed dozens of people. Scores of properties were also damaged as the protests morphed into aggression. The protests alarmed government officials and prompted them to take up the issue and come up with tighter security measures, which manifested itself as the domestic security bill, about which discussions are currently underway in parliament.
After the call for laying down arms by PKK's imprisoned leader Abdullah Öcalan as part of the reconciliation efforts pursued by the government officials and The People's Democratic Party (HDP), which act as a mediator between Ankara and PKK, 184 more ditches are reported to have been closed by the municipality.

Some of the ditches were previously closed on December 31,2014 but were later dug again after the death of a minor in a clash which erupted between police and a group of masked men who organized the demonstration and then went on to block a main road in the town of Cizre.