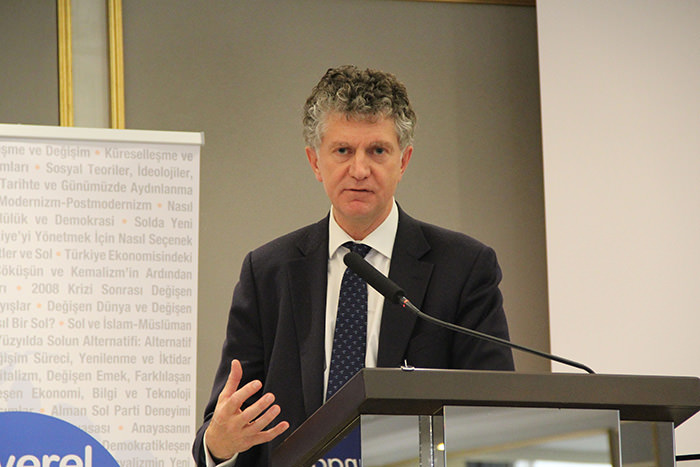 |AA Photo
by daily sabah Apr 03, 2015 12:00 am
A British diplomat, Jonathan Powell, has praised the Turkish government's efforts in the reconciliation process that it has pursued in a bid to end the Kurdish question, and said he was optimistic about reaching a conclusion in the peace attempts considering the progress achieved thus far.

Powell, the chief of staff to former British Prime Minister Tony Blair who was also the chief negotiator during the Northern Ireland peace talks, spoke during a speech at a conference titled "Talking to Terrorists - How to End Armed Conflict" in Istanbul on Wednesday. He said he held positive views about the reconciliation process and compared the Northern Ireland model to Turkey's. Recalling that every settlement issue differs depending on the nature of the processes across the world, he said: "there was no Northern Ireland model that could just be picked up and applied elsewhere."

"Who could imagine 10 years ago that a [Turkish] spy chief talking to [PKK leader Abdullah] Öcalan in İmralı? It would be unimaginable. It is a very real progress that has been made. I think the [Turkish] government deserves credit," he added.

The process was launched by the AK Party in 2012 when former prime minister, President Recep Tayyip Erdoğan, announced in December of the same year that the government was holding peace talks with Öcalan. Roughly three months after this announcement, Öcalan delivered a landmark message during the Nevruz celebrations in March, in which he called for a cease-fire. In July the following year, the Turkish Parliament passed a bill to support the country's ongoing reconciliation process to end terrorism.

Noting that he was not an expert on the Kurdish issue, Powell also said that the government had made a lot progress in the last decade.

Turkey has never been as close to reaching a conclusion in the reconciliation process after Öcalan, exerting his influence, called on the PKK to lay down its arms in a message he issued during Nevruz celebrations at the beginning of March.

Öcalan's message was read by Peoples' Democratic Party (HDP) deputies Pervin Buldan and Sırrı Süreyya Önder in both Kurdish and Turkish, where thousands gathered to celebrate the festival. The statement by Öcalan, who advised the PKK to hold a congress to lay down arms, has turned a new leaf in the process. The move, which is considered historic, has opened a new page and is expected to transform the four-decade insurgency by the PKK into a political movement where the demands and will of the group are expected to be discussed without the threat of arms.

In his letter Öcalan said: "I think it is necessary and historic for the PKK to end the 40-year-long armed struggle against the Republic of Turkey and hold a congress to conform to the new era's spirit."

Previously the process was on shaky ground as it faced scores of provocations and seemed to have settled following the disarmament call.

The conflict between the Turkish government and the PKK, considered a terrorist group by Turkey as well as the U.S. and EU, has been ongoing since 1984 and has resulted in some 40,000-100,000 casualties, as well as major economic losses for Turkey. The PKK, which at first aimed to establish a Kurdish homeland in southeast Turkey, has also suffered heavy losses during the clashes.
Last Update: Apr 03, 2015 6:56 pm
RELATED TOPICS