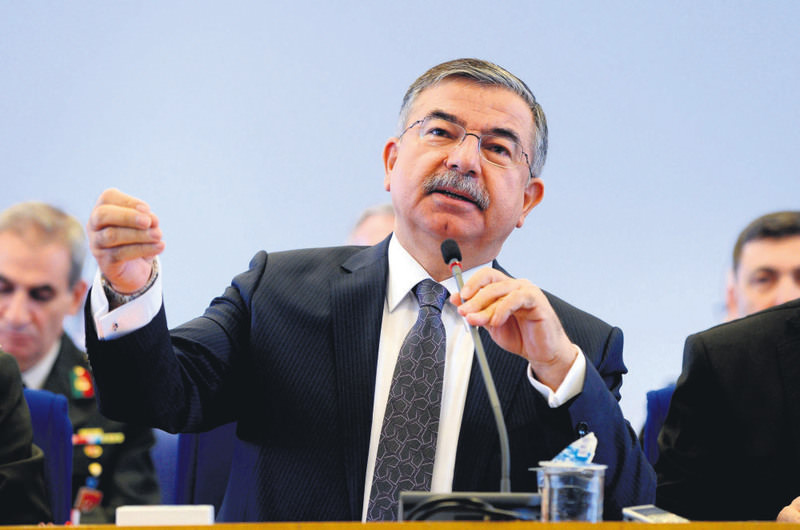 by Anadolu Agency Apr 12, 2015 12:00 am
Turkey should continue "patiently" with the 'reconciliation process' following the recent terrorist attack on Turkish troops in the eastern province of Ağrı, Defense Minister Ismet Yılmaz has said.

His comments came on Sunday after four Turkish troops were wounded, five terrorists killed and another injured in an exchange of fire after a group of terrorists opened fire with rifles on soldiers around the village of Yukarıtütek in the district of Diyadin the day before.

Answering reporters' questions in the central province of Sivas where he was attending a number of events, Yılmaz wished a speedy recovery to the wounded troops and said Turkish security forces would continue to work diligently as they always did.

Yılmaz said Turkey should continue patiently with the reconciliation process, referring to the government initiative launched in early 2013 to settle the Kurdish issue and secure an end to the decades-old conflict with the PKK which has so far claimed the lives of more than 40,000 people.

"We would like to reach this goal and we can do this only with the support of our people," he said. When asked about the timing of the incident ahead of the upcoming general elections on June 7, Yılmaz said that "such attacks will increase further."

"They will try to bring down the votes of the ruling AK Party through creating an impression that the reconciliation process is not going well. Hopefully, our people will see this ploy for what it is and ignore such attempts," he said.

Deputy Prime Minister Yalçın Akdoğan also condemned what he said was a "terrorist attack on our security forces who try their best to ensure the peace and security of our people in Agri."

"It is unacceptable to use pressure, violence and arms for political competition, and to place a lien on public will," he said on Twitter, calling for an end to "partisanship supported by terrorist organizations" and warning against "terrorizing politics."

The Turkish Interior Ministry also released a statement saying, "The attack during the deployment of troops to the region justifies our sensitivity regarding public order, and the necessity for the measures taken."

"All institutions of our government are determined to take and implement all necessary measures in the face of such incidents which undermine public order and jeopardize the security of our citizens," it said.

The reconciliation process was launched by the AK Party in 2012 when former prime minister and current president, Recep Tayyip Erdoğan, announced in December 2012 that the government was holding peace talks with Öcalan. Roughly three months after this announcement, Öcalan delivered a landmark message during Nevruz celebrations in March 2013 in which he called for a cease-fire. In July the following year, Parliament passed a bill to support the country's ongoing reconciliation process to end terrorism.
Last Update: Apr 12, 2015 8:08 pm
RELATED TOPICS