Ankara determined to conclude reconciliation with or without HDP 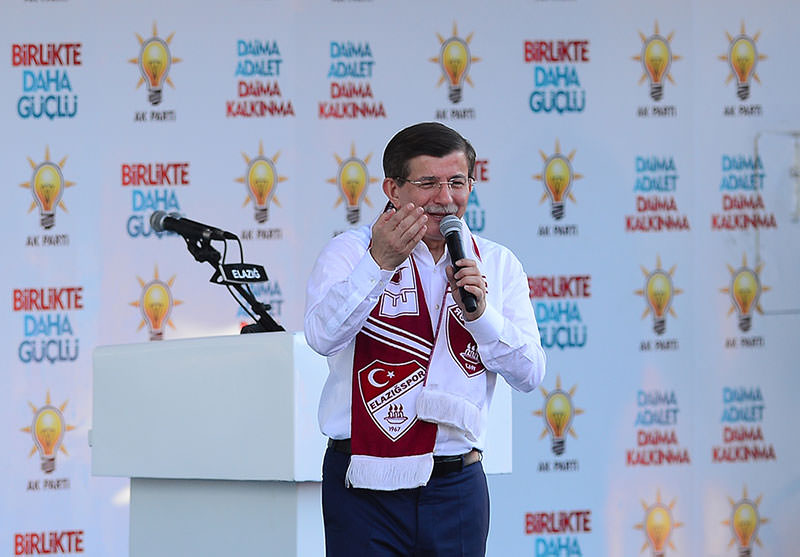 | AA Photo
by Ayşe Şahin May 07, 2015 12:00 am
Prime Minister Ahmet Davutoğlu has said the reconciliation process that the government is pursuing in a bid to end the conflict between the state and the PKK has become a cause for the entire county and will be preserved regardless of how the elections turn out. In response to concerns of whether the fragile reconciliation process will be hurt if the Peoples' Democratic Party (HDP) does not manage to pass the 10 percent election threshold to enter Parliament, Davutoğlu assured that it will continue either way.

"On the one hand, they [the PKK] hold weapons. On the other, they stage a show of democracy. Terrorism and democracy cannot coexist," Davutoğlu said during his rally in Bingöl, a province with a predominantly Kurdish population. Davutoğlu's target in his remarks was the HDP, which has recently adopted democratic rhetoric as it looks to pass the 10 percent election threshold to enter Parliament. But since the PKK keeps resisting laying down arms ahead of the elections, concerns are high that the PKK will resort to arms unless the HDP enters Parliament.

Davutoğlu is continuing to hold rallies in the eastern provinces as the June 7 general elections draw closer. His focus in Bingöl was again the reconciliation process, which failed to reach a conclusion since the PKK's highly anticipated convention to lay down arms that it pledged would take place before the elections is currently on ice. Turkish officials have been castigating the HDP and PKK for failing to stick to promises and for stalling in organizing the meeting to discuss abandoning arms, even after the PKK's imprisoned leader, Abdullah Öcalan, called on them to do so in his annual Nevruz message this past March.

Davutoğlu not only criticized the HDP for failing to persuade the PKK to lay down arms, but also for provoking the group, citing the protests on Oct. 6-7 that killed dozens of people. The protests that erupted out of a demand for more assistance for fellow Kurds fighting against the Islamic State of Iraq and al-Sham (ISIS) in Kobani, Syria came as a blow to the reconciliation process. During this fragile phase the HDP had called on its supporters to take to the streets in protest, a move that the government has criticized for a long time.

"They [the HDP] tried to turn the region [southeastern provinces] into chaos," Davutoğlu said, accusing the HDP for the deadly clashes.
In Muş on Wednesday Davutoğlu also said Turkey is determined to continue the reconciliation process that it launched to end the armed conflict with the PKK, which has claimed thousands of lives over decades, and assured again that a conclusion will be reached regardless of the outcome of the elections.

"Terrorism and peace cannot coexist. Democracy and arms cannot coexist. They will either talk about peace in the country of freedoms or choose arms," Davutoğlu said, adding that Turkey will not let the latter persist any longer.

Davutoğlu also talked about the reforms the Justice and Development (AK Party) has implemented thus far in the name of improving the rights of Turkey's Kurdish population. He said it was the ruling party that had removed bans on the use of the Kurdish language.

He also called on the HDP to urgently persuade the PKK to lay down arms and carry out a fair and free competition in the elections.