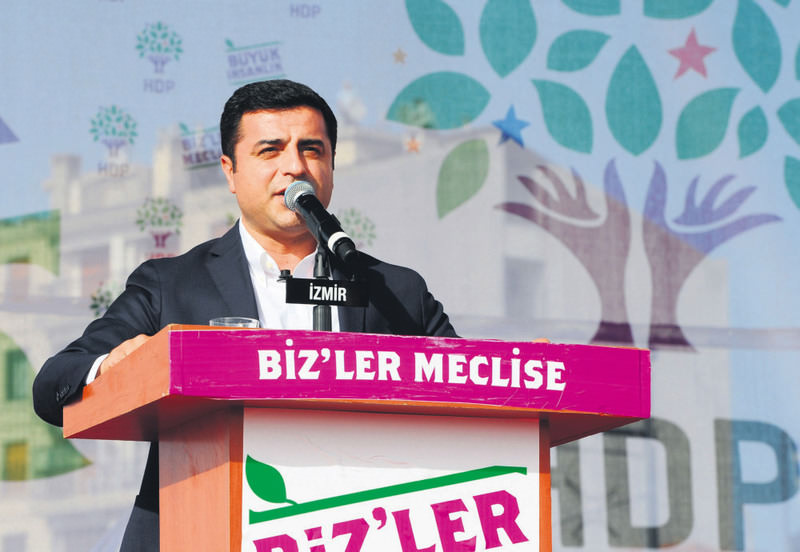 by Merve Aydoğan May 25, 2015 12:00 am
The pro-Kurdish Peoples' Democratic Party (HDP), which hid imprisoned PKK leader Abdullah Öcalan's posters during its rallies in western Turkey to receive votes from Turks to pass the 10 percent election threshold, has received open support not only from the PKK, but also extreme leftist terror organizations like the Revolutionary Peoples Liberation Party-Front (DHKP-C) and the Turkish Peoples Liberation Party-Front (THKP-C). While the PKK has threatened local people in predominantly Kurdish populated provinces forcing them to cast their vote for the HDP, the DHKP-C – which recently murdered a prosecutor at an Istanbul courthouse – openly submitted its support for the HDP, which the party welcomed, thanking it for its support.

Also, Mihraç Ural, a top militant from the THKP-C, a predecessor of the DHKP-C, and the alleged mastermind of the car bombings that took place at Hatay in 2013, released a statement demanding support for the HDP. He also called on people to vote for the HDP by using their freewill. Ural, whose name shines out for the upcoming threat by the Syrian regime and the latest deadly events by the DHKP-C, he tweeted about Prosecutor Mehmet Selim Kiraz's murder on March 31, saying: "If you contaminate justice, then you'll bear the consequences." Ural is also known to be connected to the Assad family and a former top militant in the THKP-C. He leads a group called the Urgent Ones, which allegedly trains DHKP-C militants in the camp in explosives and bomb making by military officers from the Syrian army.

Deputy Prime Minister Yalçın Akdoğan, a Cabinet member who regularly holds talks with the pro-Kurdish HDP on the Kurdish question, said on Sunday during a local TV program that the HDP was forced to enter the upcoming June 7 general elections and that the HDP participating in the elections is a pre-planned project.

HDP deputies, who previously ran as independent candidates in elections so as not to be not blocked by the 10 percent election threshold decided to run as a party in the upcoming elections. Latest polls show that support for party is around 9 percent.

With less than two weeks left until the general elections, the HDP met with the PKK in armed celebration in early April in which was perceived as disbelief in democracy due to the HDP's support in the upcoming elections under the shadow of weapons. In this regard, Akdoğan has often reiterated that the HDP must make the call for disarmament to prevent any doubts of the party's possible votes. In his statements on Sunday Akdoğan underlined that "the HDP was forced into participating in the elections by those who are hoping to obtain something out of it, which is mainly toppling the ruling Justice and Development Party [AK Party]."

Continuing his election rallies, Prime Minister Ahmet Davutoğlu met with media members on Saturday in Kocaeli and said: "The AK Party is facing three legal political parties but also three parallel organizations which cooperate with the Gülenists." Underlining the similarities between the opposition parties, Davutoğlu also stressed that while they are displaying a populist stance, they also abstain from criticizing each other. Davutoğlu claimed the HDP are seeking to pass the threshold through using terrorist organizations and that the party declined that it was DHKP-C terrorist who carried out the simultaneous bombings of two HDP provincial headquarters in the southern provinces of Adana and Mersin. Furthermore, the HDP thanked the DHKP-C due to the organization saying the suspect was not their member, although there have been claims of footage of him.

As the Gülenist media continues its propaganda for opposition parties, Davutoğlu also once more emphasized that the AK Party is not only facing political parties, but also the "parallel structure," referring to the Gülen Movement. He also said that the HDP has deliberately taken the reconciliation process off the rail, and added: "They [HDP] have sabotaged disarmament calls made by Abdullah Öcalan and also the process."

While ignoring their imprisoned leader Öcalan's call to disarm, the PKK is reportedly sending letters to homes in predominantly Kurdish populated regions in southeastern Turkey threatening people to cast their votes for the HDP, which regularly sends delegations to meet senior PKK members in northern Iraq.
Last Update: May 25, 2015 10:50 pm
RELATED TOPICS