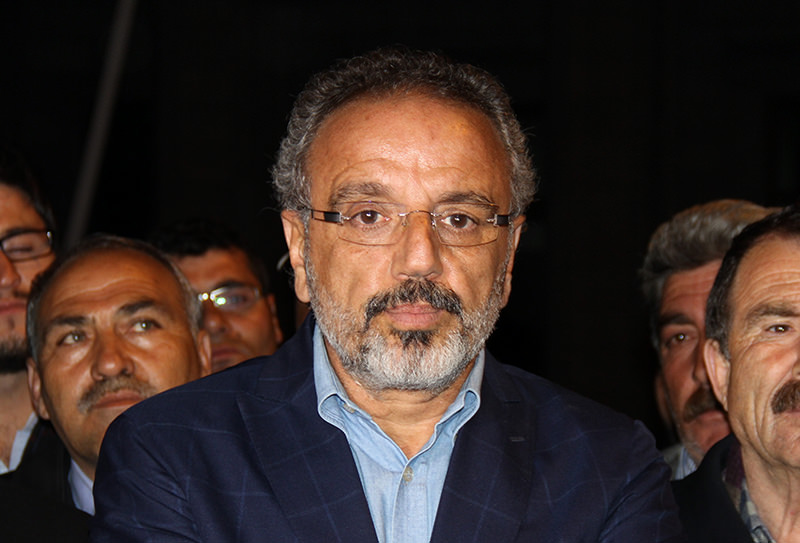 Su0131rru0131 Saku0131k, the mayor of Au011fru0131 from the Peoples' Democratic Party (HDP). (AA Photo)
by Fatih Şemsettin Işık May 26, 2015 12:00 am
Namık Sakık, the brother of Sırrı Sakık, who was elected mayor of Ağrı from the pro-Kurdish Peoples' Democratic Party (HDP), has said that none of the sons of the 35 HDP deputies are fighting in the mountains for Kurdistan, and claimed that only President Recep Tayyip Erdoğan can provide a peaceful solution in the reconciliation process.

Speaking to the media during the electoral campaign of the ruling Justice and Development Party (AK Party), Mardin deputy candidate Orhan Miroğlu on Monday said Sakık complained in regard to those who are insincere about a peaceful solution. He said: "I would not let my son die for Kurdistan. I've said in one of my statements to Cengiz Çandar, Hasan Cemal and Ertuğrul Kürkçü, who claim 'Kurds do not give their weapons,' that if you want to go, I'm a businessman, I have some fellows, I know how the guns are sold and I know the direction to the Qandil Mountains [in northern Iraq where PKK camps are], then, you go and fight. I said that we do not want to fight." He also pointed to the insincerity of HDP deputies saying: "There are 35 deputies, their children are not in the mountains; they are receiving an education in Britain and Cyprus."

Saying that Erdoğan is the only leader who can bring peace with a devoted attitude, Sakık also added that both Abdullah Öcalan and Leyla Zana are aware of this. "[Erdoğan] said that he can shoulder this reconciliation process with his whole body if needed. If he behaves in such an honorable manner and we have dignity, honor and pride, we can shoulder the same responsibility with our body and head as well," he said.

While candid statements on preventing children from dying in this 30-year old conflict from prominent Kurdish political figures continue, protests by Kurdish mothers in Diyarbakır for the return of their children who were forced to join the terrorist PKK, still linger in memory.

Starting in May 2014, mothers from across Turkey called on the PKK to release their children and held a sit-in protest in front of the Diyarbakır Metropolitan Municipality building, which is governed by former Peace and Democracy Party (BDP) Deputy Gültan Kışanak. However, municipal officials did not stop chasing them and used excuses such as a redesign of the flowerbed in the square to evict them. Moreover, HDP Co-Chair Selahattin Demirtaş who was the-then chairman of the BDP, even claimed that the mothers were paid by the National Intelligence Organization (MİT) to defame the BDP.