With HDP in Parliament, its voters look to peace efforts and PKK's disarmament 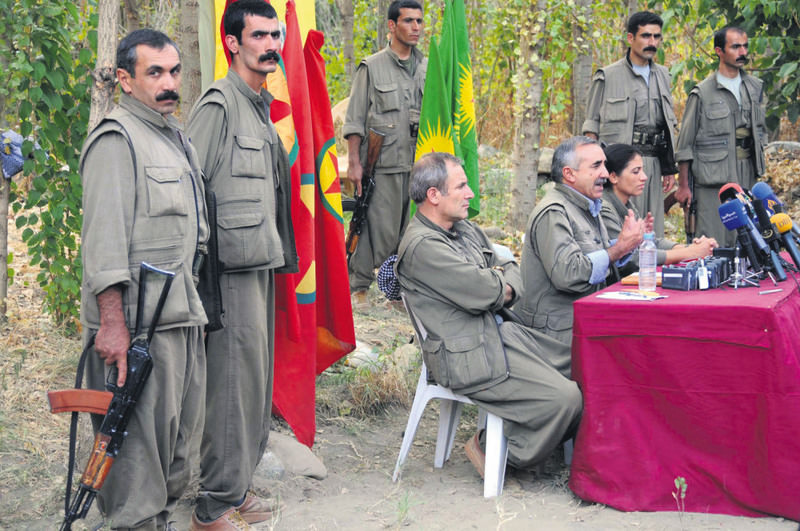 In this file photo, senior PKK figure Murat Karayu0131lan is seen giving a press conference at a PKK hideout in northern Iraq's Qandil Mountain.
by Ayşe Şahin Jun 12, 2015 12:00 am

The HDP, which passed the election threshold and secured seats in Parliament, is now expected to fulfill its peace promises. Yet, until now, there has been no call for the disarmament of the PKK, casting doubts on the party's sincerity toward the reconciliation process

Although the Justice and Development Party (AK Party) won the largest share of the vote in Sunday's elections, without a doubt, the Peoples' Democratic Party (HDP) deserves the highest credit from the polls, as it achieved what most thought was unlikely. Predictions were either that it would remain under the 10 percent threshold or pass it by a hair's breadth. But it crushed the hurdle and received 13 percent of the vote, marking a first in Turkish history. The votes it received were predominantly from Kurds, although there is a portion of votes from liberals who supported the party to bring it over the threshold and stem the flow of votes to the AK Party. Now that the goal is achieved, all eyes have turned to the party to see whether it will abide by its promise to push forward the protracted reconciliation process that was put on ice due to friction over a couple of issues. Prior to the polls, ruling party officials were suggesting that if it were not for the AK Party, the process would be obstructed and HDP officials were claiming the opposite, saying it was the HDP that was exerting efforts to reach a conclusion in the process. It is now time for the HDP to prove its sincerity over its remarks, but until now, there has been no sign of a concrete step toward advancing the process.

There were a slew of calls by ruling party officials for the HDP to push for disarmament, but the deed was postponed till after the elections.

The party making its way into parliament after extending its appeal to leftists and liberals during its campaign trail is yet to coax outlawed PKK's imprisoned leader Abdullah Öcalan to exert his influence and call for disarmament. HDP deputy Sırrı Süreyya Önder said on Thursday that his party applied for consent for the usual board to visit Öcalan, in İmralı where he is incarcerated. Önder said a day "could" be slated by Öcalan for a congress to convene to discuss laying down arms, on condition that a monitoring committee head to the island along with the HDP team.

Up until now, Öcalan called on the PKK to hold a congress to discuss laying down arms twice. The first call was announced in a joint press conference with ruling party officials via a statement, and the second call was read out by HDP Deputy Önder during the Nevruz festival. Öcalan's message proposed that the step be taken before the elections. However, the PKK did not concur, either because it was a strategy by Öcalan to stall the issue until the PKK saw whether the outcome of the elections was in their favor, or because Öcalan has lost influence over the militants and power has shifted to the administration camped in Iraq's Qandil Mountains.

A Kurdish intellectual and author, Vahdettin İnce said Öcalan should give a specific date for congress to convene.

"We expected that to happen during the reading of Öcalan's the annual Nevruz message but it did not happen. The stalling of the call for disarmament differed from the current situation. Before the elections they wanted to see the conclusion of the polls, and after the elections, they are probably waiting for the uncertainty to disperse," İnce said.

The Interim Prime Minister Ahmet Davutoğlu on Wednesday, speaking to TRT said: "The HDP is to do something. The co-chairs of the party, which has portrayed itself as a symbol of peace with beautiful rhetoric, should show up and say 'the PKK should abandon its arms.' "

In response to the call, the co-chair of the HDP, Selahattin Demirtaş said it was not up to them to make such a call, and that Öcalan can do it: "Öcalan will make the call, and he is ready in İmralı to do it."

A senior PKK official, Cemil Bayık, late on Wednesday attributed the relative success of the HDP to its commitment to Öcalan and said: "The developments that will follow will depend on whether or not Öcalan will be liberated." By the very remarks, Bayık has put forth the genuine aspiration of Qandil, and Turkey is yet to see how the HDP will handle both to satisfying Qandil and its democratic electorates who believed in its peace pursuit.

Nationalist MHP rules out coalition with HDP, equates it with terrorismThe AK Party won a clear victory in Sunday's elections but failed to achieve a majority in parliament, throwing the government into an enigma. Amid the uncertainty, possible coalition scenarios are being discussed. However due to rigid differences between the parties in both ideology and principles, any coalition that is agreed is unlikely to last long, and the option of early elections will ultimately be on the table.

The Nationalist Movement Party (MHP), which also increased its votes by 3 percent in parallel to the HDP, plays a critical role in the formation of a government. Analysts believe the most suitable alliance could be formed with the AK Party and the MHP. The MHP initially ruled out a partnership with the AK Party, but later struck a milder tone over a possible alliance. It maintained a stringent stance toward not siding with the HDP, but gave a green light to the AK on the stipulation of an end to the reconciliation process.

Any coalition formed with the opposition parties will similarly face conflict between the HDP and the MHP. And a combination of the MHP-CHP or the CHP-HDP is not possible, as together they do not constitute a majority. The options with the AK Party are considered more probable scenarios.

Although it seems like the MHP is blocking the process of forming a government with its rigid stance toward the settlement, it has its own excuses for not opting to pursue it.

In an official statement released on Thursday, the MHP delivered blistering criticism to the HDP. In biting remarks, it said "They (the HDP) have our soldiers', our policemen's, our civilians' and mostly the Kurdish people's blood on their hands. Let it be known that we do not get in the same bag with snakes, "

"Everybody knows that they will not lay down arms unless the Kurdistan Workers' Party [PKK] wants them to do so," the statement further read.

The MHP apparently equates the party with the outlawed PKK, although the HDP claims it is an independent political party and acts only as a mediator. However, the party fails to detach itself from the organization, as the stance of Qandil, İmralı and the party is the same. Opposition parties, the liberals, the democratic electorates who voted for the party and the Kurds who desire peace are expected to all urge for an acceleration in peace efforts, aware of the close ties the party has with the PKK.

The statement of the MHP also includes a recent incident during which newly-elected HDP Deputy Burcu Çelik Özkan censured village guards, which act as local militias in towns and villages protecting against attacks and reprisals from the PKK and said: "You [village guards] will clear out from this country. We know well how to redirect the Kalashnikovs you pointed at us."

This being the first sign of the HDP's failure to hold on to its promise to maintain peace prompted a harsh response from the MHP. "This language is dangerous and unvirtuous. It indicates that the HDP still rests on armed struggle, Qandil and relies on Kalashnikovs," the statement read.

The strongest warnings against the HDP as Turkey was heading to the polls, came from Deputy Prime Minister Yalçın Akdoğan, who expressed reservations that the reconciliation process would be blighted if the HDP entered Parliament. He claimed the HDP was already insincere in reaching a settlement, and once it enters Parliament, it would shelve the process.

As Turkey digests the outcome of the elections and a future coalition government as the AK Party was unable to achieve an absolute majority to form the government single-handedly, there are questions of how the reconciliation process will evolve amid the rigid differences between the opposition parties.
Last Update: Jun 12, 2015 11:49 pm
RELATED TOPICS