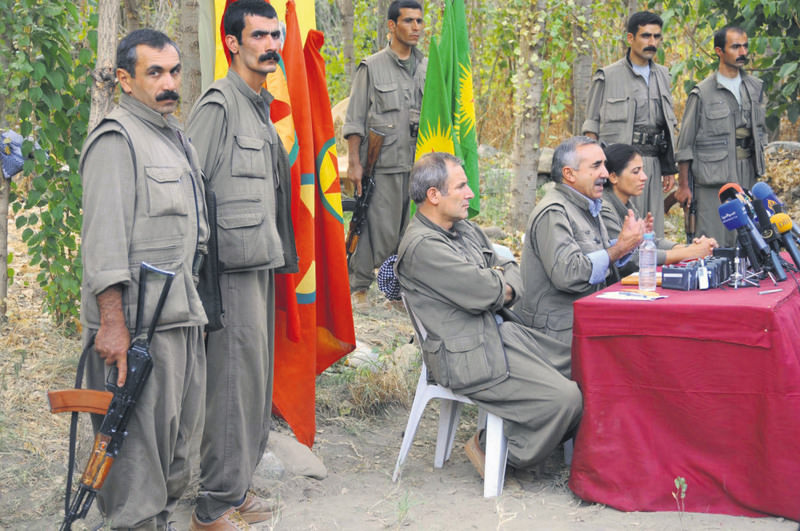 Senior PKK figure Murat Karayu0131lan speaking in a press conference in northern Iraq's Qandil Mountains where the PKK is headquartered.
by Daily Sabah Jul 14, 2015 12:00 am

The PKK has complained about HDP's passive stance since the elections that gave the party representation in parliament, and said it expects the party to be more active in shaping the country's politics

The PKK's second-in-command, Murat Karayılan, has said the Peoples' Democratic Party (HDP), which made its way into Parliament after receiving 13 percent of the vote in the June general elections, is passive in politics and suggested it should be more active as a party that "won a victory" in the polls. The PKK, which has been more vocal than the HDP since the elections, continues making comments and suggestions regarding the HDP. The latest in a series of suggestions has come from Karayılan, who previously criticized HDP Co-Chair Selahattin Demirtaş for being narrow-minded after he closed the door on a coalition with the Justice and Development Party (AK Party). PKK leader Abdullah Öcalan is serving a life sentence on İmralı Island.

"We deem its politics inadequate. Why? Weren't the June elections the most significant elections of Turkey? And who won a victory in that? The HDP. A party that won an election victory should storm through, be more active and more swift," Karayılan said on Tuesday, speaking to IMCTV, which is close to the PKK.

Demirtaş, who was praised for the appealing messages he conveyed on the campaign trail, seems to be sidelining himself from the political discussions since the elections, some analysts believe he is acting restrained for possible early elections in case the parties cannot thrush out a deal for a coalition. They interpret his stance and refraining from public speeches as preparation for early elections to avoid losing support both from the party's Kurdish base and the supporters who voted for the party attracted by his messages of peace during the campaign.

The involvement of the PKK leadership in northern Iraq's Qandil Mountains in political affairs has been proving true the warnings that the PKK is controlling the HDP, which some have said is stuck in limbo between its own will and that of the PKK.

Turkey is yet to see how the HDP, which managed to enter Parliament partly by using democratic rhetoric during its campaigning, will manage to satisfy both the PKK and its democratic voters, but so far it seems to have been handling it quite badly, taking into account the discrepancy that emerged in HDP officials' discourse every time senior PKK figures comment about the party.

Although the HDP desperately tries to detach itself from the PKK and tries to portray itself as an independent political party, and as a mediator of the reconciliation process, the PKK's incessant comments, criticism, support and suggestions regarding the party could mean that the HDP is under considerable influence by the PKK.

AK Party officials warned the public before the elections not to be deceived by Demirtaş's peaceful rhetoric, claiming that those who vote for the party are voting for the PKK in the Qandil Mountains, asserting that they receive orders from there.

The warning could be well-founded, as the PKK is making its presence felt with the strong statements it has been delivering.

On the night of the elections, Demirtaş said they are aware that there were custodial votes given to them and that they would do whatever they could to preserve them. Shortly after the remarks, Demirtaş was warned by a senior PKK figure, Mustafa Karasu, who spoke to Nuçe TV a day after the elections and objected to the use of the term "borrowed votes" by Demirtaş. Upon the criticism, Demirtaş changed his discourse and said: "We have not passed the threshold with borrowed votes. We have a strong base."

HDP Co-Chair Figen Yüksekdağ said on June 15 that the HDP is open to coalition demands. However, following the remarks, a PKK figure, Duran Kalkan, said the party cannot be part of a coalition before imprisoned PKK leader Abdullah Öcalan is released.

Karayılan, criticized Demirtaş for closing the party doors to the AK Party for a coalition.

The HDP's resistance to call on the PKK to lay down arms has also raised questions over its influence on the organization. Demirtaş, who is expected to push the reconciliation process further as promised, said it was not up to him to make the call. The PKK leadership later released a statement and said they would not lay down arms without Öcalan first being freed.
Last Update: Jul 14, 2015 7:51 pm
RELATED TOPICS