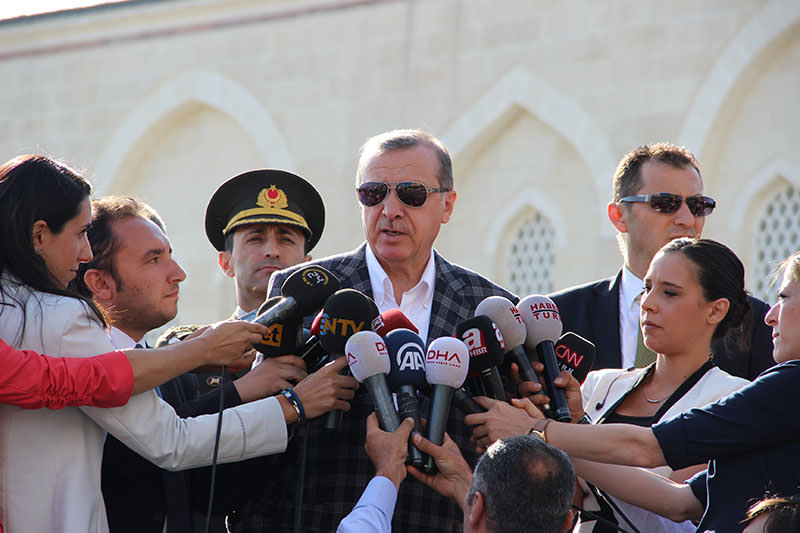 | AA Photo
by Daily Sabah Jul 17, 2015 12:00 am
Turkey's President Recep Tayyip Erdoğan stated on early Friday that he does not accept the expression of "Dolmabahçe Agreement", referring to the reconciliation declaration consisting of ten points, which was shared with the public following the meeting between pro-Kurdish Peoples' Democratic Party (HDP) deputies and Deputy Prime Minister Yalçın Akdoğan at Istanbul's Dolmabahçe Palace on February 28. The ten points were declared as a roadmap for a final solution of Turkey's Kurdish issue and 30 year-old PKK armed insurgency.

Speaking to the press after performing the Eid al-Fitr prayer at Istanbul's Ataşehir Mimar Sinan Mosque on Friday morning, Erdoğan said: "I, by no means, accept the expression of Dolmabahçe agreement." Erdoğan added that if a step is to be taken concerning the future of the country, it should be taken at the Turkish Parliament. "An agreement cannot be made with those who lean their backs on the terrorist organization [PKK]", Erdoğan said.

Deputy Prime Minister Yalçın Akdoğan, Minister of Interior Efkan Ala and three deputies of HDP, namely Sırrı Süreyya Önder, İdris Baluken and Pervin Buldan, held talks on February 28 to discuss and outline the steps that need to be taken to ensure a cease-fire between the government and the outlawed PKK organization. The two parties had agreed on a road-plan based on ten articles, after which they made a joint-statement at Istanbul's Dolmabahçe Palace, unveiling the articles.

Since then, President Erdoğan has on a number of public occasions and media statements said that he did not approve of the content of the declaration, implying that the government had proceeded with the talks without reaching a mutual understanding with him, an allegation challenged by some members of the cabinet.

In the meantime, Kurdish Communities Union (KCK), an umbrella network that includes the PKK, announced last week that their self-imposed cease-fire which was declared via a message of the PKK's imprisoned leader Abdullah Öcalan in 2013 has ended, dealing a huge blow to the protracted reconciliation process that was expected to speed up with the HDP's entrance into the Parliament.

In a blistering statement, the KCK administration accused the government of engaging in deeds "that could lead to conflicts" and failing to hold on to the cease-fire.

"As of now, all the dams and the machines used in the construction of the dams will be the target of our guerilla forces," the statement further read. One day after KCK's statement, the PKK militants opened fire on a minibus in northeastern Turkey during a clash with the gendarmerie forces, as a result of which one civilian was killed and two others injured. The incident happened following the militants' attempt to damage water reservoirs in the region and prevent the municipality employees from fixing the problem.

Erdoğan, commenting on the aforementioned incident, said on Friday, with the PKK militants opening fire on minibuses and people being killed, Turkey cannot celebrate Eid al-Fitr as it should, especially in southeastern part of the country. "In such circumstances, the extension [of the PKK] having a representation in the parliament [referring to HDP] should do its best," Erdoğan said, implying the HDP should urge PKK to disarm.

HDP's co-chairman Selahattin Demirtaş had previously said that even if the HDP called on PKK to disarm, the organization would not consider it as an "instruction" since "there is no organic relation" between them. But, President Erdoğan reacted upon Demirtaş's statement saying, even if there is no "organic relation", there is an "inorganic one" that the Turkish government knows based on intelligence and generally accepted information within the society.

The conflict between the Turkish state and the outlawed PKK has been ongoing since 1984 and has resulted in some 40,000 casualties as well as major economic losses for Turkey. The PKK initially aimed to establish an independent Kurdistan in southeastern Turkey, but changed its rhetoric to democratic autonomy over time. The terrorist group has been headquartered in northern Iraq's Qandil Mountains since the height of Turkey's military response in 1997.