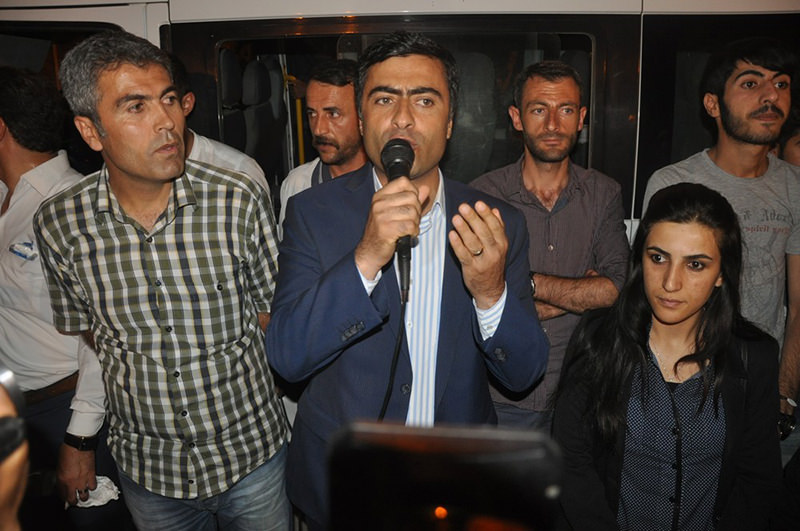 HDP Deputy Abdullah Zeydan (Center) (DHA Photo)
by Daily Sabah Jul 27, 2015 12:00 am
The Peoples' Democratic Party (HDP) deputy Abdullah Zeydan has made provocative statements and threatened Turkey on Monday by saying that the terrorist organization PKK has the power to "suffocate Turkey with its spit."

While commenting on the recent airstrikes against PKK targets in Northern Iraq, Zeydan defended the PKK, and argued that the AK Party and President Recep Tayyip Erdoğan ended the ceasefire, disregarding the KCK's (Kurdistan Community Union – an umbrella organization of the outlawed PKK) announcement of the end of ceasefire and carried out terrorist attacks against construction sites and law enforcement officers.

"You are playing with fire," the HDP deputy said, addressing the Turkish government.

Zeydan claimed that the PKK, -which is recognized as a terrorist organization by the U.S., the E.U. and Turkey- is a peaceful movement, which he claimed has the power to exterminate Turkey.

Turkey has stepped up efforts against terrorism following a suspected ISIS bomb attack carried out last Monday in the country's southeastern Şanlıurfa province which killed 32 people and injured dozens.

Since then, Turkey has initiated a nationwide anti-terror operation, detaining over 800 suspects with ties to the self-proclaimed Islamic State of Iraq and al-Sham (ISIS) as well as the terrorist PKK organization.

The Turkish Air Force has been also carrying airstrikes against the PKK in northern Iraq and the ISIS militants in northern Syria.

The U.S. strongly condemned the PKK's recent terrorist attacks and called on the organization to renounce terrorism and re-engage in peace talks with Turkey in a statement released Saturday night.
Last Update: Jul 27, 2015 1:24 pm
RELATED TOPICS