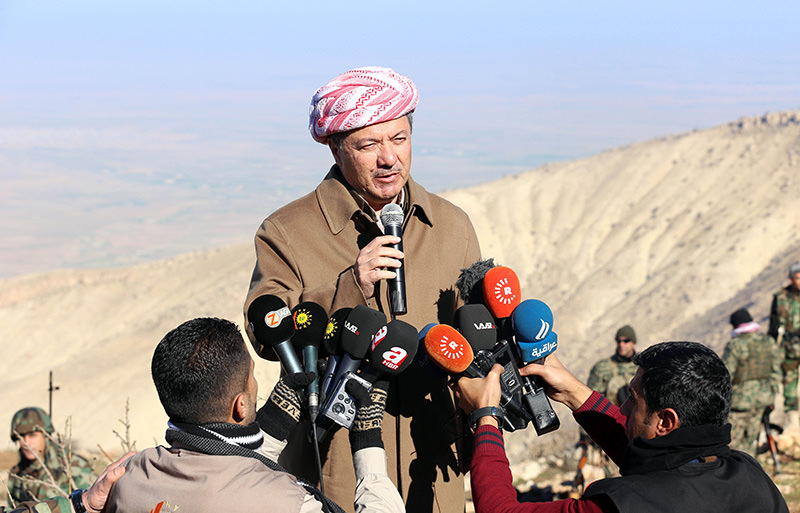 Iraqi Kurdish leader Masoud Barzani speaks to journalists on December 21, 2014 during a visit to Mount Sinjar in the autonomous Kurdistan region, in northwestern Iraq (AFP photo)
by Nurbanu Kızıl Jul 27, 2015 12:00 am
The president of the Kurdish Regional Government (KRG) in Northern Iraq, Masoud Barzani on Monday has harshly criticized the PKK for failing to make good use of the opportunities provided by Turkey and blamed them for having pride.

"The Turkish government has taken positive steps, and has adopted a positive attitude for a peaceful resolution, however, we have seen that some sides (the PKK) has taken it as a matter of pride and did not utilize these opportunities," Barzani said.

The KRG president emphasized that issues cannot be resolved through provocation, slogans, fight and violence, while he added that one should side with peace and dialogue.

Barzani also criticized the PKK terrorist organization for disabling the pro-Kurdish Peoples' Democratic Party's (HDP) role regarding the issue of disarmament and the renouncement of armed struggle and said that it was a colossal mistake.

"Peace is a long process, and a long time is necessary," Barzani said, who added there is already a number of wars in the region, and that there was no need for new wars.

He harshly criticized the PKK for having a monistic attitude and interfering in other regions where Kurds live.

Turkey's Prime Minister Ahmet Davutoğlu has recently spoken with KRG President Barzani regarding the recent attacks against ISIS positions in northern Syria and the PKK in Northern Iraq. Davutoğlu noted that Barzani supported the operations by saying that Turkey's anti-PKK and ISIS operations were based on legitimate grounds.

Turkey has granted clearance for the deployment of manned and unmanned aircraft from the U.S. and other coalition members participating in air operations against ISIS to military bases in Turkey following a phone call between U.S. President Barack Obama and President Recep Tayyip Erdoğan, which reportedly sealed the deal on July 24.

The group, which is designated as a terrorist organization by the U.S., the EU and Turkey was formed in 1978 and has been fighting the Turkish government for an independent state until the early 2000's. The group then shifted its goal to autonomy in predominately Kurdish inhabited regions of Turkey.