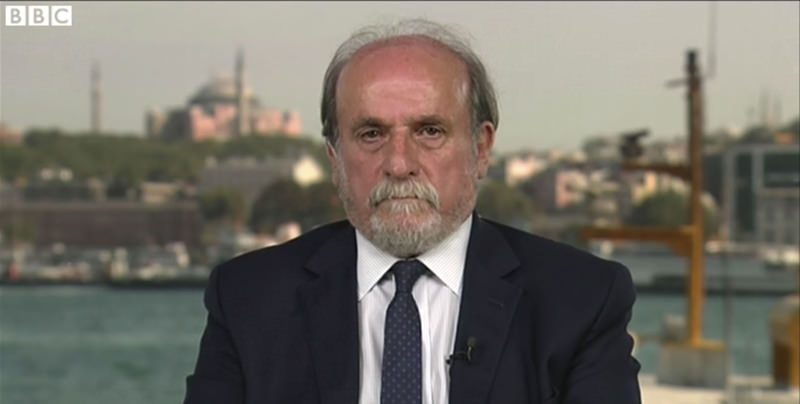 by Daily Sabah Aug 06, 2015 12:00 am
Pro-Kurdish Peoples' Democratic Party (HDP) co-spokesman and İzmir Deputy Ertuğrul Kürkçü said that PKK terror attacks on Turkish security forces are not "a matter of condemnation" in a live broadcast on BBC World on Thursday.

Responding to a question of whether or not he condemns the recent terror attacks by the PKK, he said: "This is not a matter of condemnation or condoning. This is something else. We have to first see what's happening. What's happening is a 90-year struggle of which the last 30 years has been between the Turkish state and the Kurdish insurgency. Therefore, if you have insurgency, it means that you have violence and you have counter violence." In answering a question about the relationship between the HDP and PKK he said: "We have no organizational and no organic or inorganic relations with the PKK. What we say is that we denounce the war situation. This is not a one sided issue."

After the June 7 general elections, the umbrella organization that includes the PKK and the Kurdish Communities Union (KCK) issued a statement on July 11 that said that the cease-fire had ended and also threatened Turkey with further attacks.

Since July 11, more than 22 security officers and six civilians have been killed by the PKK terrorist organization and its youth wing, the Patriotic Revolutionist Youth Movement (YDG-H).

HDP Co-Chair Figen Yüksekdağ said on July 19 that the HDP relies on the Syrian PPK-affiliate Democratic Union Party's (PYD) People's Protection Units (YPG). "They say that our party – the HDP – relies on a terror organization. I will answer those who don't understand. We rely on those who are fighting against ISIS [Islamic State of Iraq and al-Sham] in Kobani and Rojava. We rely on the YPG and the PYD, and we see no harm in saying that," Yüksekdağ said, speaking in the Suruç district of southeastern Şanlıurfa province after a visit by her party to the northern Syrian Kurdish town of Kobani.