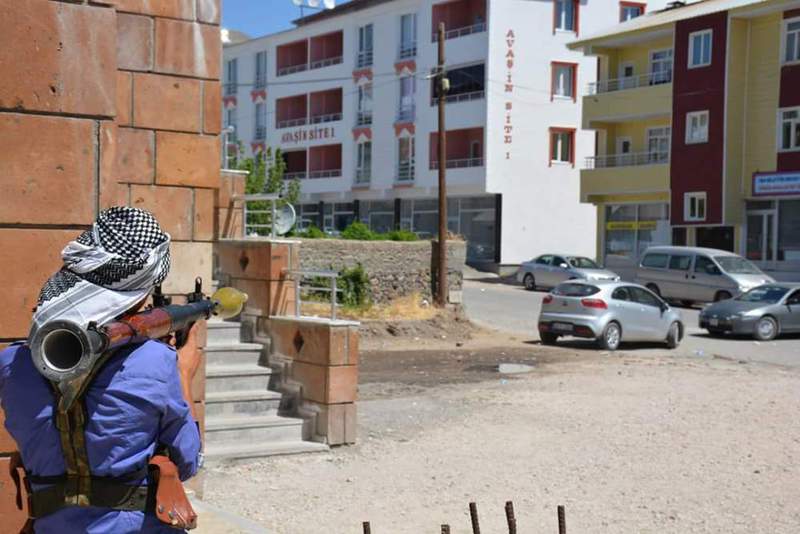 by Daily Sabah Aug 19, 2015 12:00 am
Having been hit badly in rural areas and losing almost all its hideouts in the mountains, along with some high-ranking figures in the wake of operations carried out by the Turkish Armed Forces (TSK) in retaliation for terrorist attacks, the PKK has shifted its strategy to spread terror in urban areas by digging out ditches, piling up arms and aiming to draw security personnel into clashes in order to manipulate public perception and hide its weaknesses.

Hijacking in the eastern and southeastern regions has become closely identified with the PKK. The terrorist organization has carried out many attacks resulting in the deaths of civilians related to hijacking. Early Monday, for example, the terrorist group tried to stop a bus and force the passengers to get out of the vehicle in the Şenkaya district of the province of Erzurum. The bus driver, however, did not stop and the bus was followed by an immediate hail of bullets. The 35-year old bus driver Garip Bektaş lost his life after catching a bullet in the back. Horrified by the attack, the passengers were forced to get out of the bus, which was afterwards set on fire by the terrorists.Known for attacking or stealing heavy equipment, the terrorist organization has fostered a new tactic in urban areas. The terrorists dig out ditches, shutting down the street in an attempt to stop any military vehicle from entering the neighborhood. Paralyzing the traffic by piling up big stones and iron doors, the terrorists placed a fire tube near the barricade to blow it up in case of military action.

In the Varto district of Muş, where authorities ordered a total curfew, the PKK late Saturday destroyed a bridge used by civilians. It was reported that the terrorists destroyed the bridge having stolen heavy equipment after threatening and neutralizing the security guard at a building site.

Meanwhile, the terrorist organization has turned a mosque into its arsenal in the Nusaybin district of Mardin. Following a raid on Sunday launched by the Mardin Police Department teams, dozens of long-barreled weapons and rocket launchers were seized, which were hidden under prayer rugs. There has been another raid in the same neighborhood, as a result of which the police seized 250-kilogram A4 explosives, two rocket launchers, three long-barreled weapons and hundreds of bullets, along with dozens of Molotov cocktails.
RELATED TOPICS