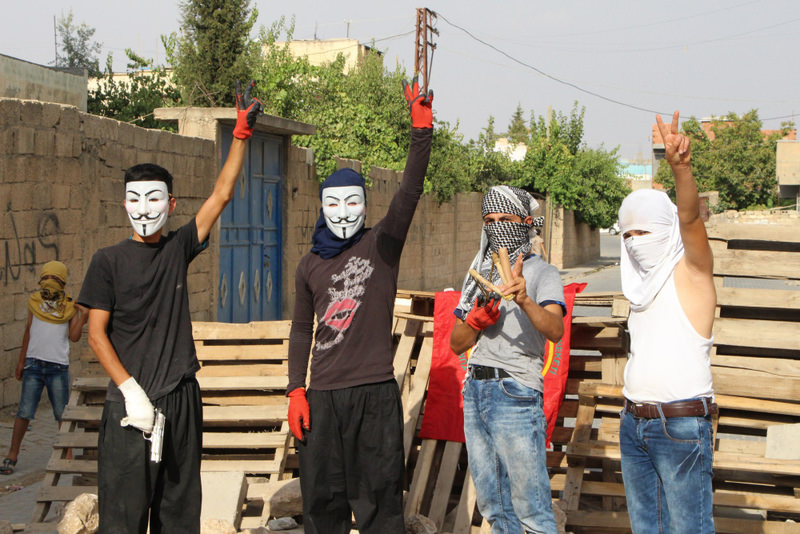 A group of children from the PKK's youth branch, YDG-H, pose for cameras during a road blockade by the terrorist organization.
by Yunus Paksoy Aug 19, 2015 12:00 am

Having unilaterally declared the end of the cease-fire on July 11 using the government building dams and bridges in Kurdish areas as an excuse, the PKK terrorist organization has made life quite unbearable for Kurds in the region, forcing them to migrate in the wake of digging ditches in the streets, blowing up infrastructure and raiding weddings. Additionally, the PKK uses children in clashes as human shields and arms them against security personnel.

It was expected that the PKK would lay down its arms after the beginning of the reconciliation process. The PKK, however, made life miserable in the region with arson, roadside explosions and ambushes. The PKK's urban youth branch, the Patriotic Revolutionist Youth Movement (YDG-H), aims to spread fear across provinces by opening fire on security personnel and police stations with rifles.

Digging ditches in the streets is a recent tactic in the PKK's playbook whereby the terrorists are able to draw in security personnel in an attempt to lure the troops into firing at children used as shields. Covering their faces with masks, children are often in the front carrying rifles and rocket launchers. Security personnel, however, refrain from acting recklessly by carrying out meticulous operations in order not to play into the PKK's hands.

The people in the region have grown afraid of even calling an ambulance since the PKK attacks opening fire on ambulances and abducting the personnel. The most tragic example of such attacks took place in July in the Tekman district of Erzurum province when terrorists hijacked an ambulance carrying a pregnant woman in labor.The discomfort with the paralyzing attacks by the PKK is not limited to the aforementioned incidents. The terrorist attacks have brought flights at the newly built airport in the Yüksekova district of Hakkari province to a halt. Inaugurated on May 26, the airport has handled a great number of passengers, around 22,000, in only two months. The heavy burden falls on the people again since one has to take a four-hour ride before arriving at the nearest airport.

In the meantime, the main road in the Çukurca district of Hakkari has been closed for eight days due to explosives planted by the PKK. Drivers urged the terrorist organization to put an end to the attacks that have brought trade in the region to a standstill.

As the government aims to develop the region with infrastructure investments, the PKK targets dams under construction that employ thousands of people. The sub-industry in agriculture advances and the migration problem is hindered to a certain extent. Locals, as a result, express their dissatisfaction and exasperation regarding the attacks as greatly crippling life.

The Diyarbakır Governorate on Monday released a statement in light of the aforementioned incidents and deadly attacks. "Our citizens are unable to carry out economic and social activities as well as travel. Locals whose daily lives are negatively affected have become the victims," the statement read. This statement was followed by the village headmen on Sunday in the Silvan district of Diyarbakır province reading out a manifesto, condemning the PKK and urging an immediate solution.
Last Update: Aug 19, 2015 11:21 am
RELATED TOPICS