Who is to blame for ending the cease-fire, pausing reconciliation? 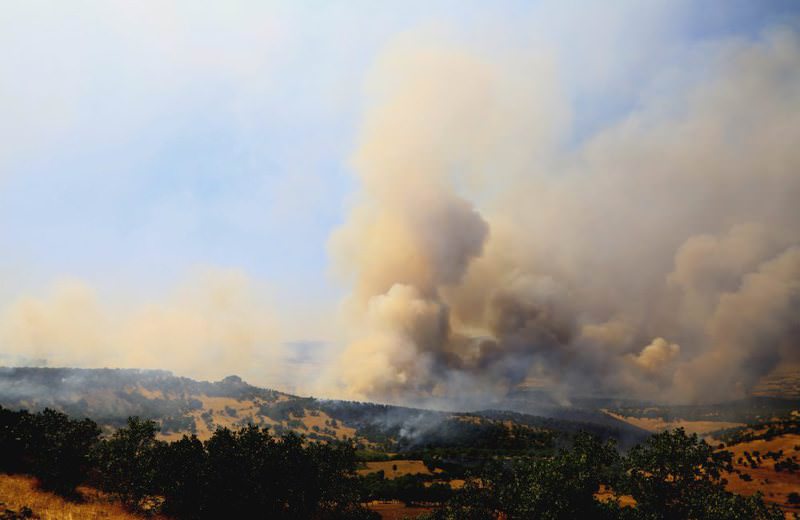 Smoke rises during armed clashes between Turkish soldiers and PKK militants in the Lice district of Diyarbaku0131r on Aug. 18.
by Ayşe Şahin Aug 21, 2015 12:00 am

Although Ankara is subject to accusations for ending a two-year cease-fire between the state and the PKK, a brief look at the chronology of developments during the reconciliation process sheds light on how the process was sabotaged by the HDP and PKK, prompting a response from Ankara that shelved the process

Since the government launched a wide-scale operation against the outlawed PKK in a blatant response to the killing of two officers at their home on July 22, the responsibility for the attack claimed by the militants, the Peoples' Democratic Party (HDP) has been putting the blame for ending the cease-fire, which has been in force for roughly two years, on the government. Propagating the view that Ankara failed to abide by the reconciliation process that was launched by Justice and Development Party (AK Party) in 2013 to invigorate democracy, the HDP has further been calling on government officials to urgently return to peace efforts. While the media is also abuzz with talks looking for who to blame for the escalating PKK violence, a brief recollection of events in which the PKK along with the HDP attempted to cripple the settlement efforts, provides the necessary background of how the 2013 cease-fire announced by the PKK's incarcerated leader, Abdullah Öcalan, reached an end.

After the reconciliation process was launched and the PKK announced it would leave Turkey, then prime minister and current president, Recep Tayyip Erdoğan, assured that there would be no operation against the PKK as long as the process was in effect.

On March 21, 2013, in his annual Nevruz message Öcalan said: "We have come to a point in which ideas speak and guns silence. I say our armed forces should retreat over the borders. This is not quitting the fight, this is ushering in a different kind of fight." This was the first call from Öcalan to the PKK to lay down arms during the reconciliation process and he repeated this call in his Nevruz messages in 2014 and 2015. Following Öcalan's message, a senior PKK figure, Murat Karayılan, hinted that the PKK would not easily adhere to his call to lay down arms saying: "It is not that easy to end armed struggle. Without Öcalan's release it is not possible." Öcalan's liberation as a stipulation for disarmament would on and off be put forth by both the HDP and the PKK throughout the process bringing it to an ultimate deadlock.

While the PKK administration continued negative statements regarding the process, the government formed the Wisemen Council of 63 people on April 4, 2013, to inform the public across Turkey about the reconciliation process. However, amid these developments, the PKK conducted an attack in the province of Ağrı on May 1 2013, Labor Day, killing two soldiers. Erdoğan announced in June the same year that only 15 percent of militants had left. His remarks were followed by Karayılan's statement: "We are loyal to Öcalan's orders but even if he gives the order from prison, we won't abandon arms." Meanwhile, the PKK was continuing to block roads and set vehicles on fire as provocations in eastern Turkey. In July, 2013 Cemil Bayık, another PKK figure, threatened Ankara, saying if government officials do not take a concrete step by September they will halt the retreat. And, as expected, the PKK announced in September that they stopped leaving Turkey.

Despite the efforts to block the process the government continued its democratization initiatives and lifted the ban on using the Kurdish language in private schools in late September. The Kurdish Communities Union (KCK), an umbrella organization that includes the PKK, ended the process on March 15, 2014, a year after Öcalan's call and said the AK Party government was no longer an addressee of the PKK. Despite the statement, Öcalan reiterated his call for disarmament in March 2014 during Nevruz celebrations. The PKK intensified its attacks during that period, and in five months injured eight police officers, and killed a solider and a commander in one of the attacks. Meanwhile, the government did not reciprocate these provocations and attacks, not wanting to hurt the fragile reconciliation process.

In February 2015, a development that raised hopes once again in the name of reaching a resolution in the reconciliation process took place. The PKK and Öcalan reached a consensus for a congress to discuss disarmament. The decision was announced in Dolmabahçe Palace in a historic step agreed to by HDP and AK Party government officials. HDP Co-Chair Selahattin Demirtaş was not late to sabotage the development using the Domestic Security Reform bill that aimed to empower security officers as a pretext. He said: "The government cannot insist on the bill and say it deepens democracy at the same time. The government does not give hope with the policies it conducts for peace." Bayık said the statements that the PKK will lay down arms are nothing but election propaganda on March 11, and repeated the condition of Öcalan's liberation. Öcalan repeated his call for disarmament in his annual Nevruz message and said it was time for the PKK to pursue its cause on the political platform instead of resorting to arms. That call was never brought into fruition with only months until the elections. The HDP was using peaceful rhetoric to appeal to democrats and liberals, but violence and pressure was ongoing in eastern provinces. All eyes turned to the elections, and there were hopes that once the HDP entered Parliament it would be able to coax the PKK to lay down arms, an election promise of the party that could not be fulfilled after the elections.

The PKK sharpened its tone once the HDP secured its place in Parliament and repeated that they will never abandon arms unless Öcalan is liberated. PKK leaders said it was not up to Öcalan to make the decision and that the PKK itself could decide if they would abandon arms or not. Just four days after the June 7 elections, PKK militants launched an attack in Silopi that injured two police officers. On June 20, a soldier was killed as result of a PKK attack in Adıyaman province. On June 22, two police officers were killed. On July 11, the KCK released a statement announcing an end to the cease-fire. "As of now, all the dams and the machines used in the construction of the dams will be the target of our guerrilla forces," the statement read. On July 20, Bayık called on PKK supporters to take up arms for self-defense and mobilize.

And on July 22, the PKK killed two officers in their home, which they claimed was in retaliation of the Suruç suicide attack that killed 33 leftist activists a day before. The attack, was claimed to have been conducted by a suicide bomber from the Islamic State of Iraq and al-Sham (ISIS). The latest incident prompted the government to launch airstrikes on PKK camps located in the Qandil Mountains of northern Iraq.
RELATED TOPICS