Co-mayors in jail over 'self-rule' claims 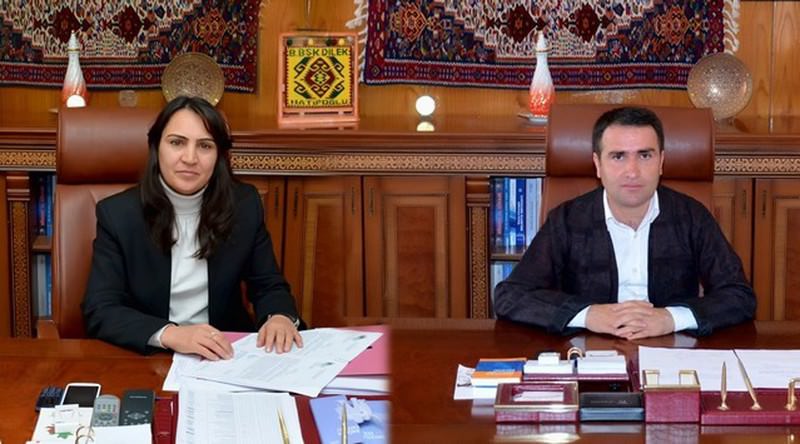 by Daily Sabah with Wires Aug 23, 2015 12:00 am
Five people, including the co-mayors of two districts in the southeastern Diyarbakır province have been jailed over alleged "autonomy" claims, judicial sources said on Sunday. Two other co-mayors of the province of Hakkari, Dilek Hatipoğlu and Nurullah Çiftçi, were also arrested by the court due to the same claims of the self-rule.

A local court in Diyarbakır charged five people, including the two co-mayors of the central Sur district of the region's biggest city Diyarbakır, Seyid Narin and Silvan Fatma Şık Barut, as well as Silvan Co-Mayor Yüksel Bodakçı with "disrupting the unity and territorial integrity of the state". The two co-mayors of Hakkari province, Hatipoğlu and Çiftçi, were also sent to jail pending further trials.

The mayors of two districts in southeastern Diyarbakır province had been taken into custody over alleged "self-rule" claims last Wednesday.Reports said that so-called people's assemblies in districts including Silopi and Cizre in Sirnak province had declared self-rule and would no longer recognise state institutions.

While the two out of seven were released on conditional probations, police are still on the lookout for four more suspects.

Regarding the latest alleged "autonomy" claims, the pro-Kurdish Democratic Regions Party (DBP), which is known to be in alliance with the pro-Kurdish Peoples' Democratic Party (HDP), and is often described as the HDP's fraternal party, has made striking remarks.

The co-chair of the party, Emine Ayla, said on Thursday they are striving via armed struggle. "We are different, Kurdish, and cannot be made away with," she said. "We live under the same sky, we live on the same land, and we will be a part of the governance."

Again, a co-mayor of Diyarbakır, Gültan Kışanak from the HDP previously reacted against the imprisonment of the mayors of Sur and Silvan and advocated self-rule claims as legitimate.

Making a statement to the press on Wednesday, Kışanak called for the mayors' release and said: "If the state detains my district mayor, then I also promulgate self-rule. The self-rule demand of these people is a political demand."