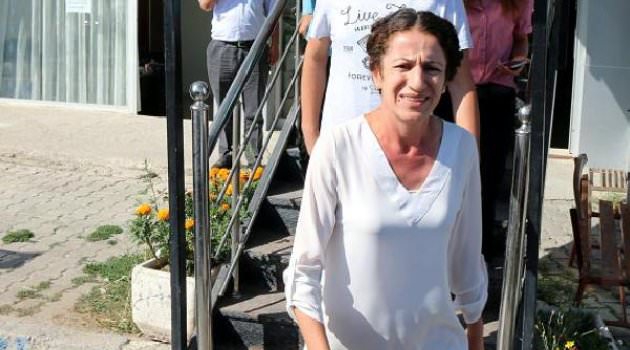 by Daily Sabah Aug 24, 2015 12:00 am
The co-mayor of Edremit district of southeastern Van province, Sevil Rojbin Çetin, was arrested on Monday for trying to disrupt the constitutional order.

According to the obtained information, within the scope of the enquiry commenced by the chief public prosecutor's office of Van, Mayor Sevil Rojbin Çetin and municipality employee S. S. were interrogated by the public prosecutor. Following their medical examinations, Çetin and S.S. were brought into court upon the prosecutor's arrest request.

Mayor Çetin was arrested in accordance with the Article 302 of the Turkish Penal Code for trying "to disrupt the unity and territorial integrity of the state". On the other hand, S .S. was released on the condition of judicial review.

Edremit Mayor Çetin was taken into custody on charges of declaration of "autonomy" in the early hours of August 14 along with S.S. who was charged for disclosing the 'autonomy' claim to the press, after the Van public prosecutor's office launched an investigation over the 'self-rule' claim.

Previously, on August 23, five people, including the co-mayors of two districts in the southeastern Diyarbakır province were arrested on charges of declaration of "autonomy." Two other co-mayors of Hakkari province, Dilek Hatipoğlu and Nurullah Çiftçi, were also arrested by the court on the same day, again on charges of declaration of "self-rule".

All the arrested mayors are members of the Democratic Regions Party (DBP).Regarding the "autonomy" claims, the DBP, which is known to be in alliance with the pro-Kurdish Peoples' Democratic Party (HDP), and is often described as the HDP's fraternal party, has made striking remarks.

The co-chair of the party, Emine Ayla, said on August 20, they are striving via armed struggle. "We are different, Kurdish, and cannot be made away with," she said. "We live under the same sky, we live on the same land, and we will be a part of the governance."

Again, a co-mayor of Diyarbakır, Gültan Kışanak from the HDP previously reacted against the imprisonment of the mayors of Sur and Silvan and advocated self-rule claims as legitimate.

Making a statement to the press on Wednesday, Kışanak called for the mayors' release and said: "If the state detains my district mayor, then I also promulgate self-rule. The self-rule demand of these people is a political demand."