PKK may announce tactical cease-fire due to heavy casualties 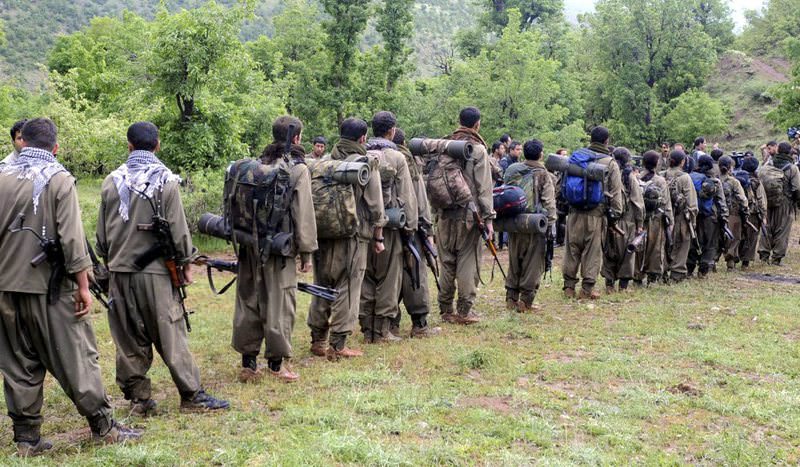 by Ali Ünal Aug 27, 2015 12:00 am
The military has been carrying out intensive operations against the PKK since it unilaterally ended the ceasefire that had been ongoing for more than two years. Reportedly, the Turkish Armed Forces killed nearby 1,000 terrorists, 500 terrorists were injured, and 230 surrendered in the last 35 days. According to sources in Ankara, the PKK is expected to declare a tactical ceasefire in the coming days due to its heavy casualties.

Nevertheless, due to constant denials from PKK leaders to end armed conflict, Ankara is likely to consider any call for a ceasefire as a tactical move to heal wounds. Most recently, senior PKK commander Duran Kalkan on Tuesday called on armed followers to refrain from unprovoked attacks on security forces.

"Absolutely no attacks should be made against soldiers who have not embarked on an operation nor attacked guerrillas or civilians," Kalkan told PKK-affiliated Fırat News on Tuesday. Last Saturday, pro-Kurdish People's Democratic Party (HDP) Co-Chair Selahattin Demirtaş suggested that the only way for the violence to end was a unilateral PKK ceasefire. "The killing must stop. The PKK needs to end its armed violence unconditionally," Demirtaş said. Responding to this call in the German newspaper Welt am Sonntag on Monday, senior PKK leader Cemil Bayık waved away suggestions that the PKK should lay down its weapons: "There will be no more one-sided calls to lay down arms."

As Turkey is heading toward early elections on Nov. 1, this ceasefire also may aim to strengthen Demirtaş who wants to put some distance between his party and the PKK.

However, interim Prime Minister Ahmet Davutoğlu reiterate that operations against the PKK will continue. Speaking to the media in Ankara, Davutoğlu said on Aug. 18 that the operations would not stop even if the PKK calls for a tactical ceasefire. He said that there is no alternative to public order: "No one should ever fantasize about subjecting public order to a negotiation; we will not tolerate it." Likewise, President Erdoğan said the PKK should bury its arms rather than simply putting them down. "Arms should be buried rather than dropped until terrorist organizations that brandish weapons against our people no longer pose a threat to our country," Erdoğan said during a ceremony held to honor outgoing Chief of the General Staff Gen. Necdet Özel on Aug. 11. He also asserted that the Kurdish reconciliation process was frozen.
RELATED TOPICS