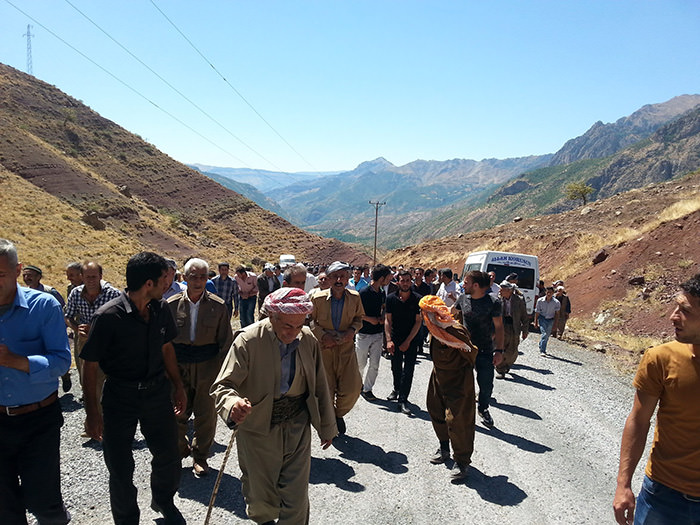 A group of people protests PKK destroying bridge in u015eemdinli district of Hakkari province (DHA Photo)
by Mehmet Çelik Sep 04, 2015 12:00 am
A group of residents in Turkey's southeastern Şırnak province rescued a sergeant in the Turkish Armed Forces on Friday from the hands of PKK terrorists, as they attempted to attack him on his way back from the hospital with his wife and children.

The sergeant had taken his sick wife to Şırnak Military Hospital, but a group of four terrorists attempted to intercept them on their way back as he was driving through Ömer Kabak Square. The sergeant reportedly wanted to counter the terrorists with his weapon, however, he avoided using it, thinking of his accompanying family.

The PKK terrorists were reportedly surprised to see the solidarity shown by the residents.

Local sources reported that people in the region have not been happy with the ongoing attacks and killings by the PKK, as well as other disruptions such as road blocks, burning work vehicles and suspending business, which have negatively affected daily life in the region.

"The rise and reappearance of the PKK and the recent attacks limits our daily life. We are asked to close our business or they dig ditches on the roads, damaging the infrastructure that we all need," said a local source to Daily Sabah from Nusaybin district of southeastern Mardin who preferred to remain anonymous. The source, a small business owner, also said the rising terror leaves everyone anxious day and night, and that they are worried of their young population being exploited ideologically.

"I had an engagement party but I could not invite anyone, including my parents who live in a village. I was afraid my guests would be intercepted and face hostility by the PKK terrorists on their way," said C.D., 26, from Diyarbakır province who also spoke to Daily Sabah. "The ongoing terrorist attacks keep the region behind in terms of development and economic activity. It ultimately affects the Kurds in the region in a negative way," he added.

Meanwhile, a group of 120 influential leaders from prominent families of Turkey's eastern and southeastern regions made a public call to the PKK on Sept. 1 in Şırnak province, urging the terrorist organization to lay down arms and leave the country.

Leaders from the provinces of Diyarbakır, Şanlıurfa, Mardin, Şırnak and Muş made the plea in a joint press statement. "We want armed members to stop violence and leave the country as soon as possible to ensure peace again in Turkey," said Mehmet Şirin Akçay, a prominent figure in the region, who read the statement publicly. "Our region needs peace, tranquility and common sense, not weapons," he said, and added that the community leaders are ready to support to the reconciliation process with the PKK.

The fighting between the PKK and the security forces saw a fragile lull for a two-and-a-half year period from early 2013 in what is publicly known as the resolution process in an attempt to end the conflict.
Last Update: Sep 04, 2015 4:31 pm
RELATED TOPICS